Give your bar stools a new life with these step by step instructions for doing a bar stool makeover. 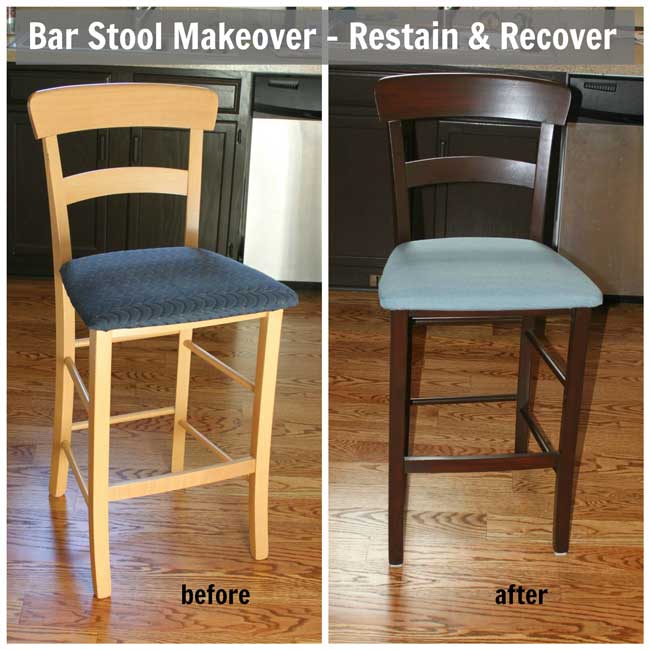 After redoing our kitchen last fall, I had originally planned to just get rid of these bar stools. The longer they sat in our basement though, the more I considered attempting to give them a second life. I’m so glad I did! This bar stool makeover was really easy and turned out better than I expected. Can’t get much better than that!

These stools were given to us more than 10 years ago when a friend of ours was moving and wanted to get rid of them. At the time, we lived in an apartment and happily accepted most cast-off furniture if it was in good shape. I never really cared for the faux wood color or the seat cover, but they worked functionally. After so many repainting and re-staining projects last year, I started to look at these stools with a new eye and decided a re-stain and recover was in order.

I highly recommend General Finishes Gel Stain. I have no relationship with the company, I have just had really good luck with their products. I bought mine locally at the Woodsmith store, but I’ve included links above if you don’t have a local store that sells it. (Product links are affiliate links from amazon.com).

My bar stools were not solid wood and the original finish wasn’t going to sand down well, so I didn’t bother. After removing the seats, which were just screwed down underneath, I gave each stool a thorough wipe down to remove any kitchen grime. Then I took out my foam brush and started staining. I applied it as evenly as I could. The initial application was fairly streaky, but I didn’t panic as I knew more coats were in my future. 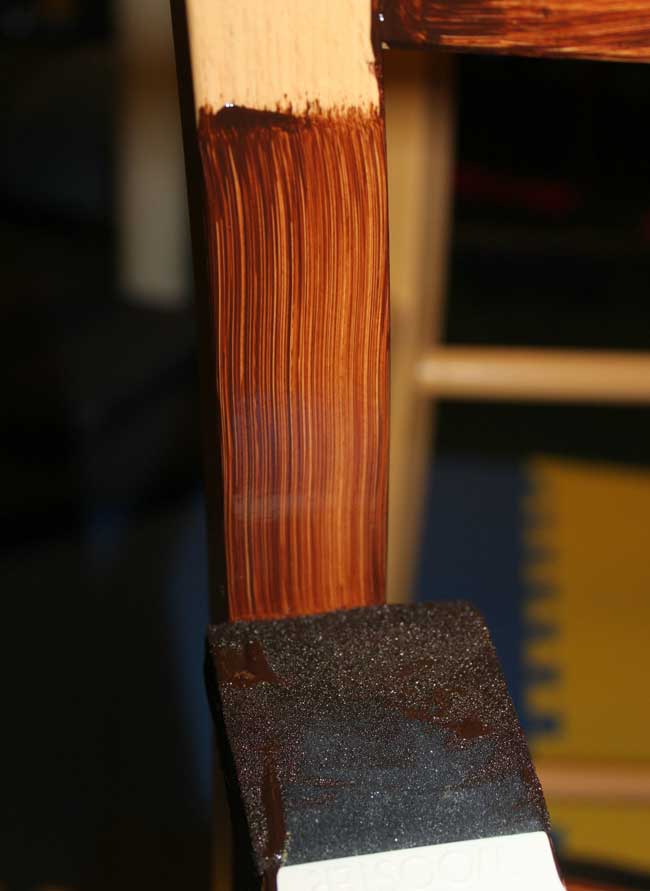 When I previously used this same stain to redo my mantel and trim, I applied and then wiped off. I was interested in a darker finish for my chairs and with it not being natural wood, I knew all the stain would likely just wipe completely off. I tested it though and that was in fact what happened. So I proceeded with applying the stain all over the chair and letting it dry completely (4-6 hours). This is what it looked like after the first coat. 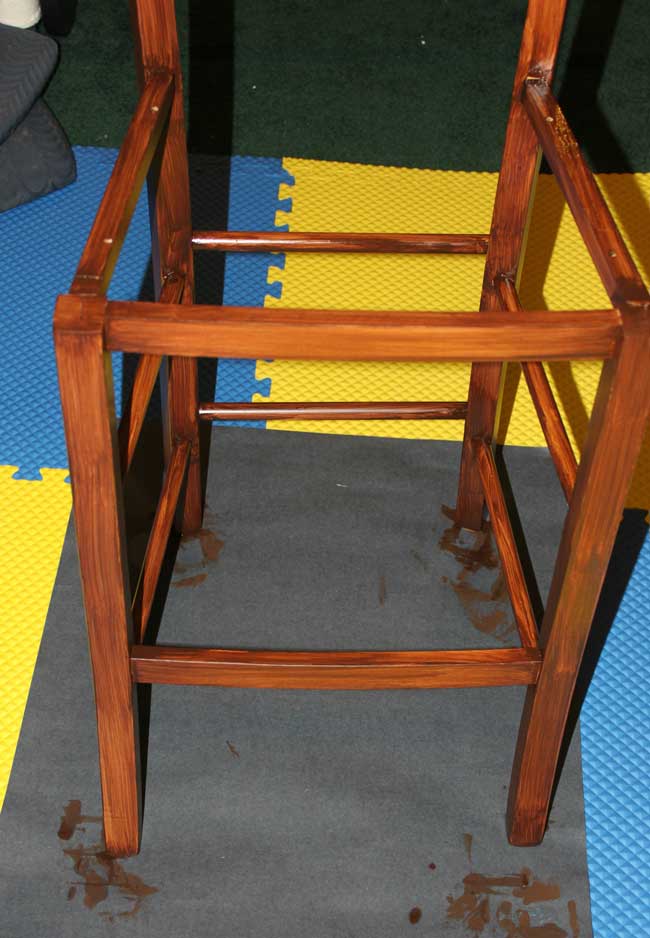 I applied 3 coats to each chair. Then I used the polyacrylic top coat to set the stain. I applied it also with a foam brush as evenly as possible. I did just one coat of poly but touched up later in the few spots I missed. 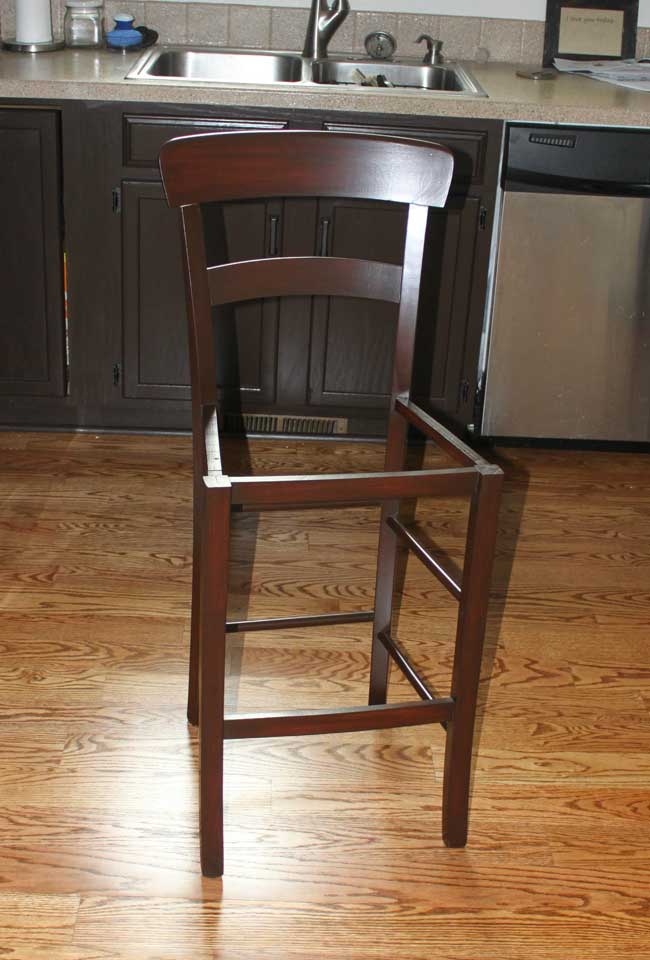 For recovering the seats, I used fabric from a curtain I purchased from Target. I originally bought it to make a roman shade for the kitchen window. I haven’t tackled that yet, but based on my measurements there was more than enough material to also use for the bar stool seat covers. 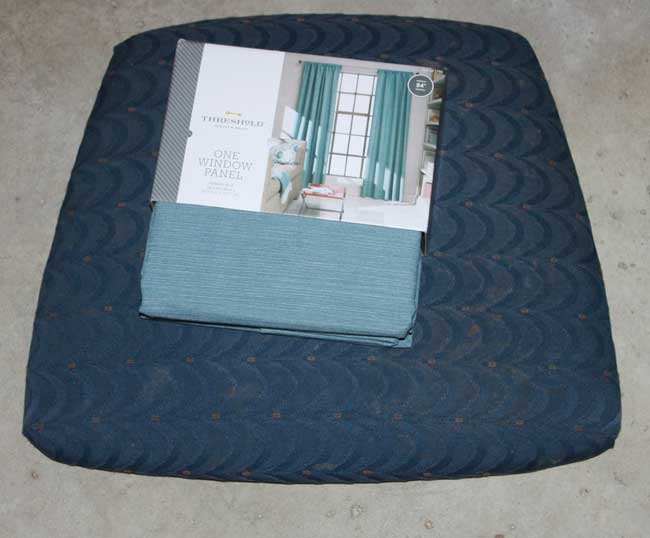 I started by removing the old cushion cover, pulling out the staples with a pair of pliers. 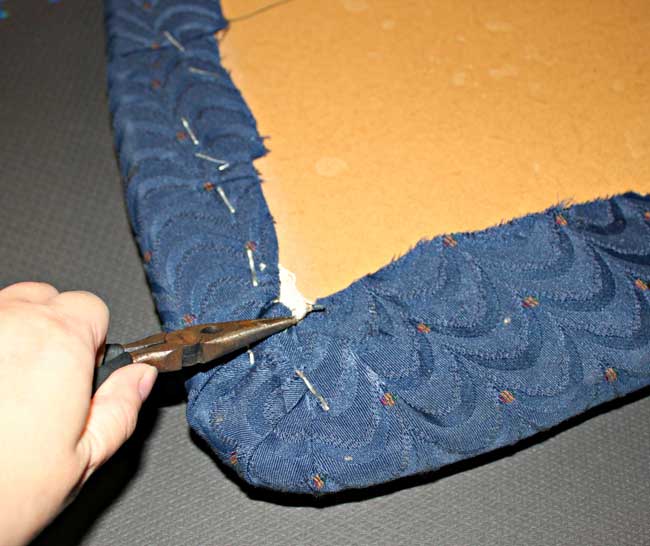 After that I used the old cushion cover to cut my fabric to the right size. I just cut it as a rectangle figuring I’d trim it after I got it stapled on. 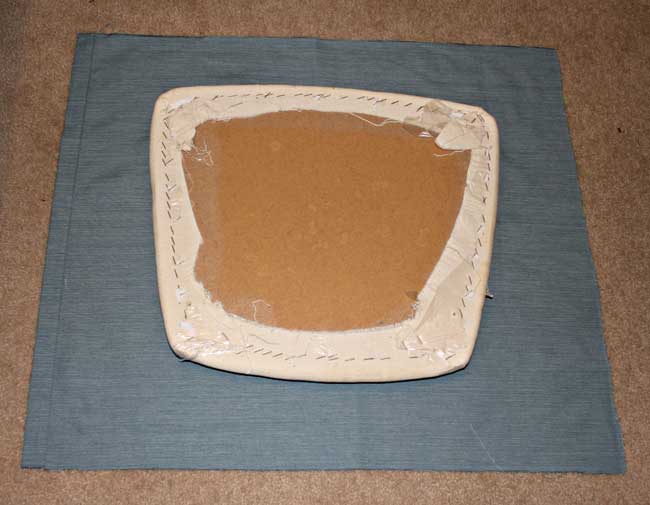 I pulled the fabric tight around the corners of the cushion first and stapled down, kind of like wrapping an odd shaped present. The goal was to keep as smooth as possible on the front. 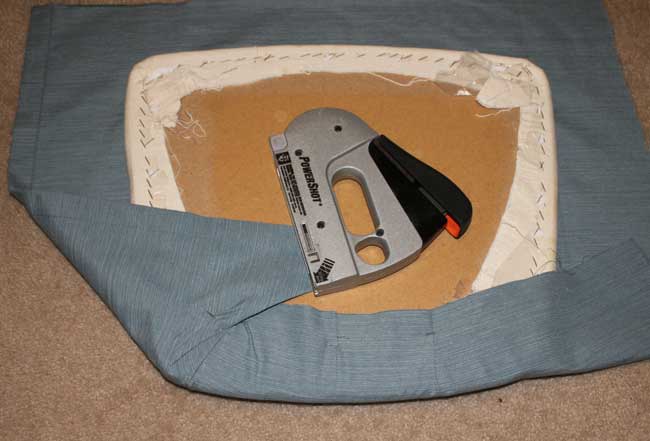 I stapled all the way around and then trimmed the excess fabric that was mainly at the corners. I probably went a little staple crazy which I may regret if I ever decide to recover these again! 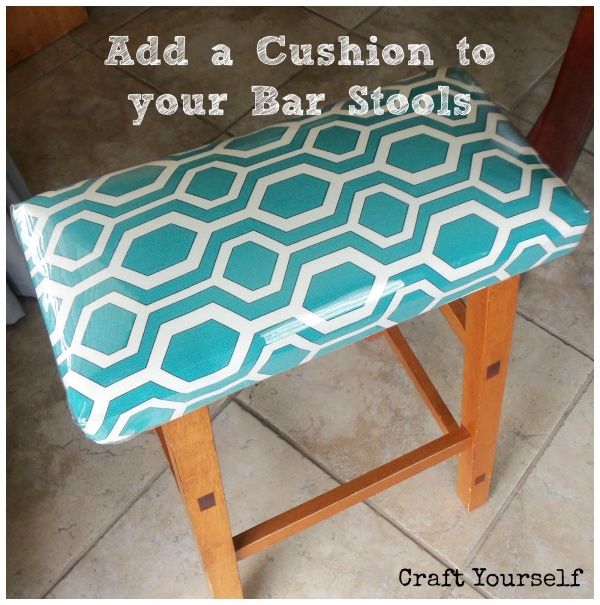 But, it looked great from the front, so I’ll worry about that some other time. 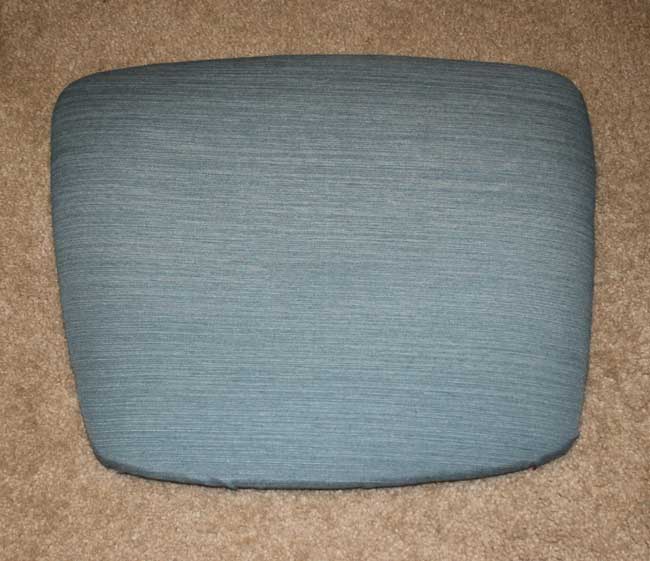 Finally, I screwed the seats back onto the bar stool frames. My husband may have helped me with that part as he thought I was taking a little too long. Maybe I’ve figured out a way to trick him into helping with my DIY projects! Here’s a closer look at one of the finished stools. 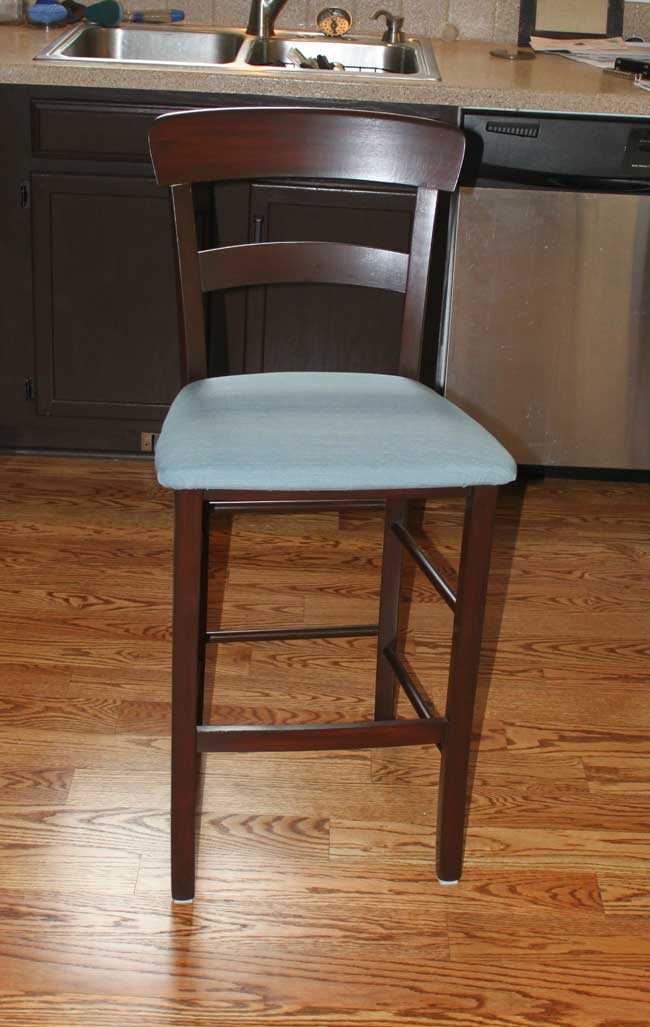 And with them back in their rightful place in our kitchen. I forgot how nice it is to have stools there! 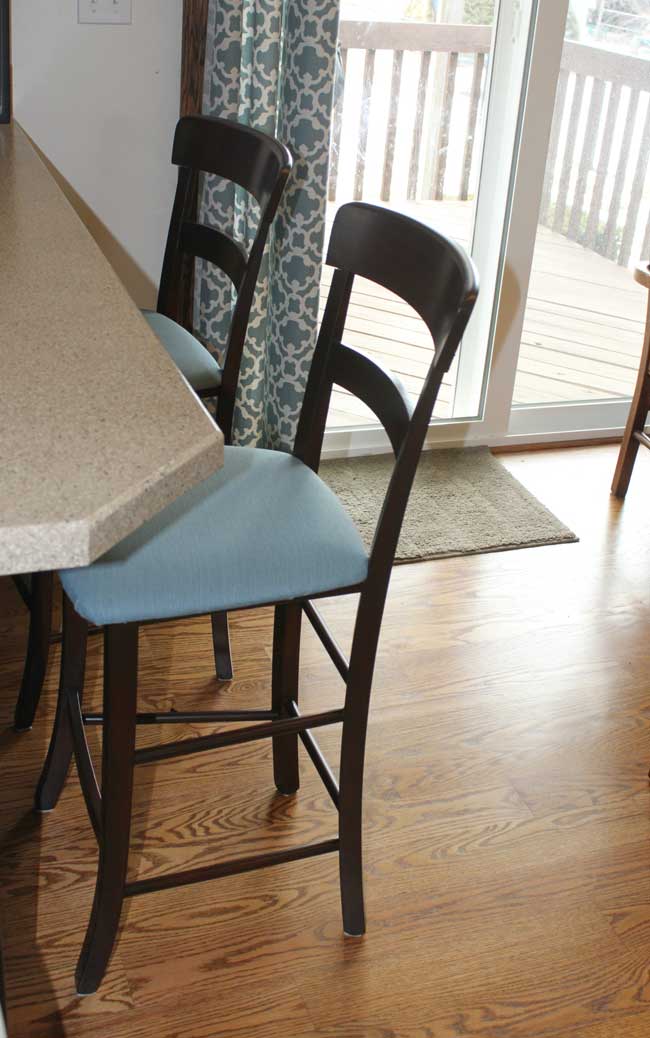 I have yet to do a full reveal of our kitchen. You’ve seen most of it already, but I’d like to do an actual show-off one day. I know I keep promising, but I’d really like to get the roman shade done for the kitchen window first. I’m actively working on my game plan for that, I just need to find time to tackle it.

Linked Up At: Made By You Mondays; Create Link Inspire; Whimsy Wednesday; 52 Mantels; The Party Bunch;