Bleach pen t-shirts are an easy and inexpensive way to create personalized t-shirts for all ages and occasions.

I tried my hand at designing my own t-shirts this weekend using a bleach pen. These are for the 4th of July,  It was such an easy project and relatively inexpensive, so I see more bleach pen projects in my future. The red one is for my son and the blue one is mine.

I wanted to make my son a t-shirt to wear to the 4th of July Parade. I picked up a 100% cotton t-shirt from Target and then made my own stencil on my Silhouette Cameo. You could easily make this with pre-bought stencils though since it’s only numbers and shapes. First I applied the stencil to my t-shirt. It was made from vinyl so it adhered to the shirt. I found this helpful so the stencil didn’t shift. Contact paper also works well. 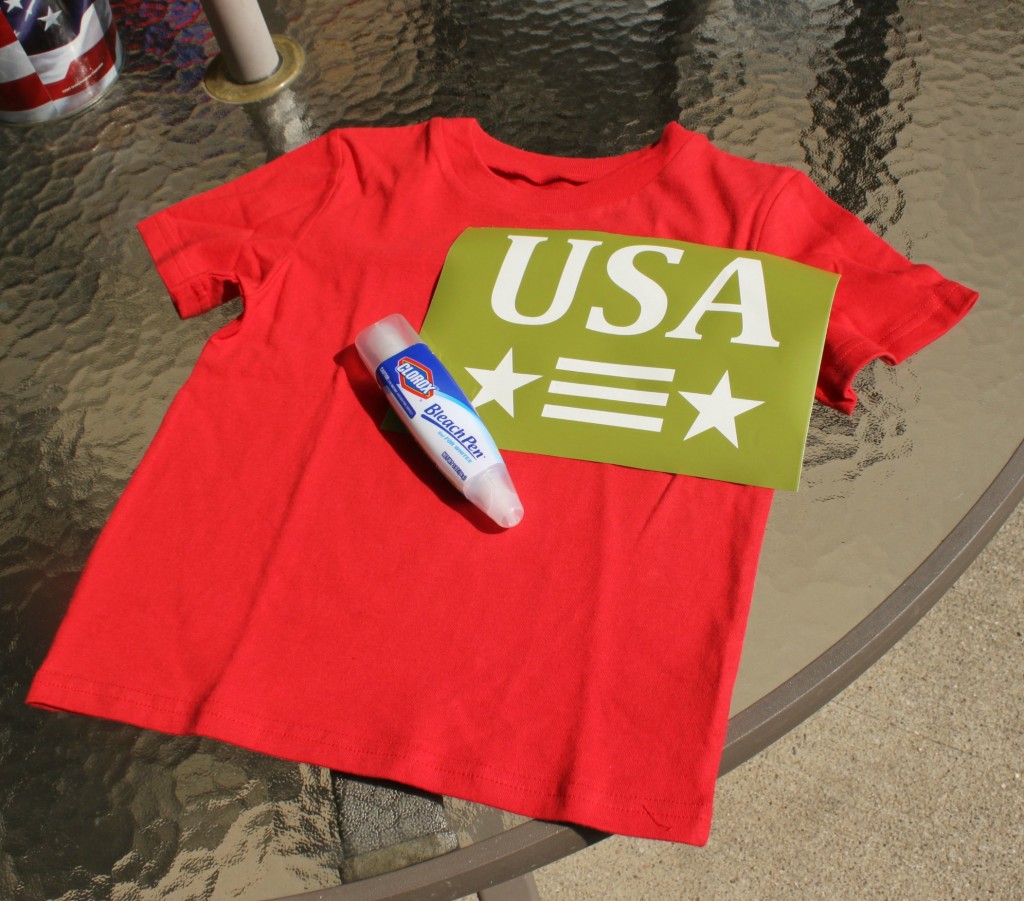 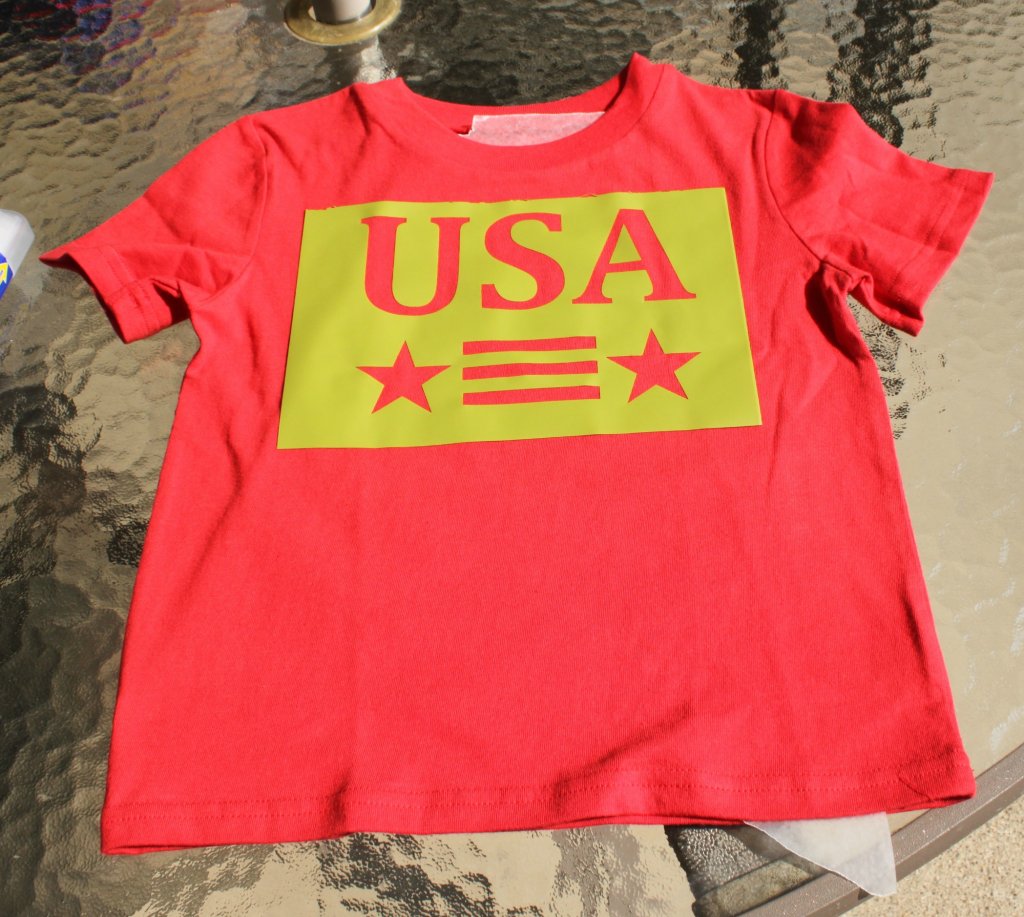 Then I traced the stencil using the bleach pen. After I traced each letter or shape, I spread it around a little bit with my finger to even out the bleach. I chose to work on this outside so the bleach fumes didn’t bother me at all. Then I let the bleach dry for a few hours. i was concerned at first that it would end up pink instead of white, but once it was dry, it was white. i touched up a few spots after I removed my stencil. It’s difficult to make the color come out completely even, so it has a vintage-y look to it, which I really liked!

After the shirt dried fully, I rinsed it in cold water and then washed and dried it in the washing machine. I tried to get my son to model the t-shirt for me. I got one halfway decent picture and the rest he was being super silly. I have a feeling we have a class clown in our future. 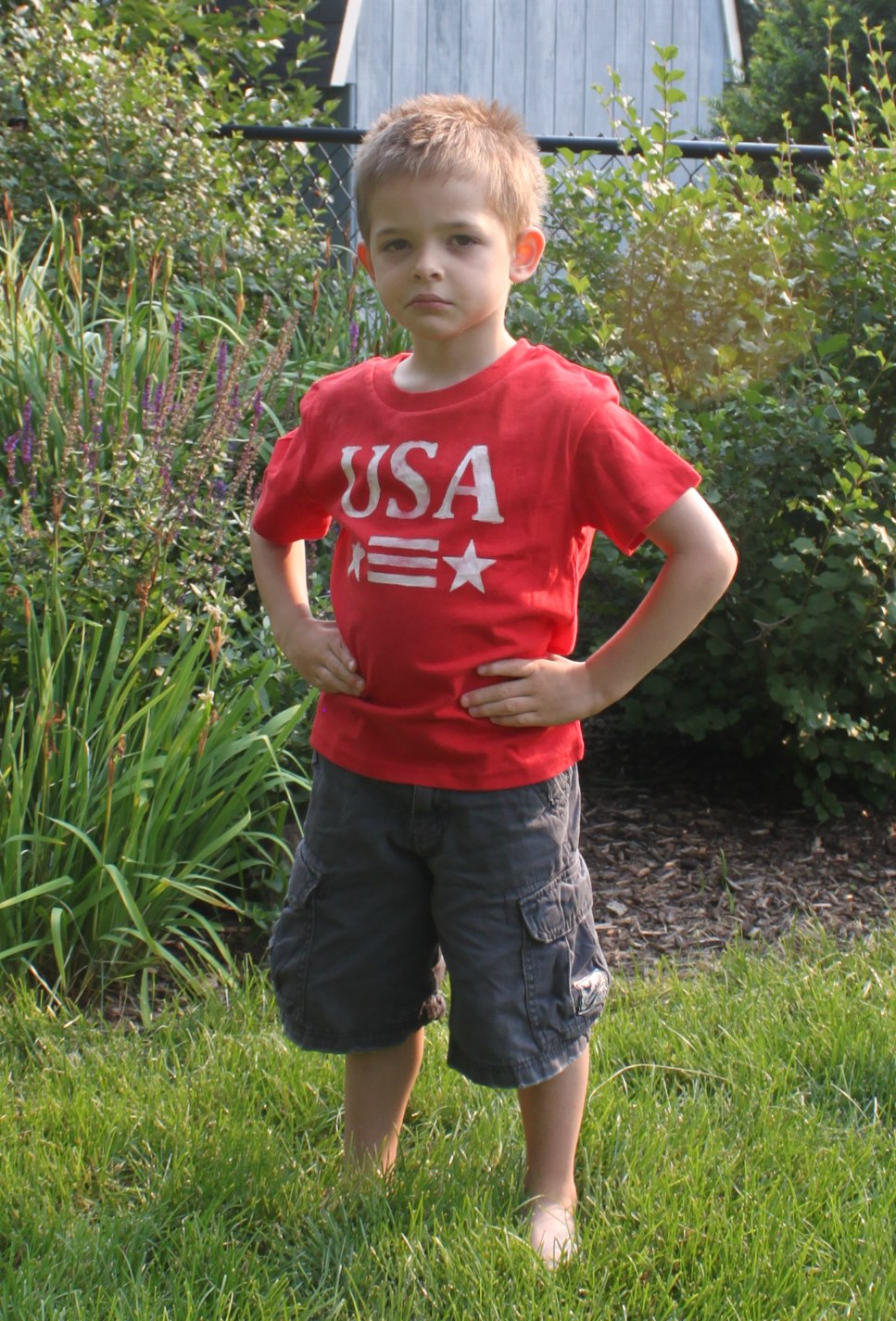 For the blue one I made for myself, I also bought a 100% cotton t-shirt at Target. I had this Martha Stewart stencil already, but I hadn’t used it yet. I thought it looked kind of like fireworks. On a side note, I really liked the stencil – high quality with an adhesive backing. I used the same technique as above. With an intricate stencil though like this one, you need to make sure you’re not too heavy handed with the bleach gel. 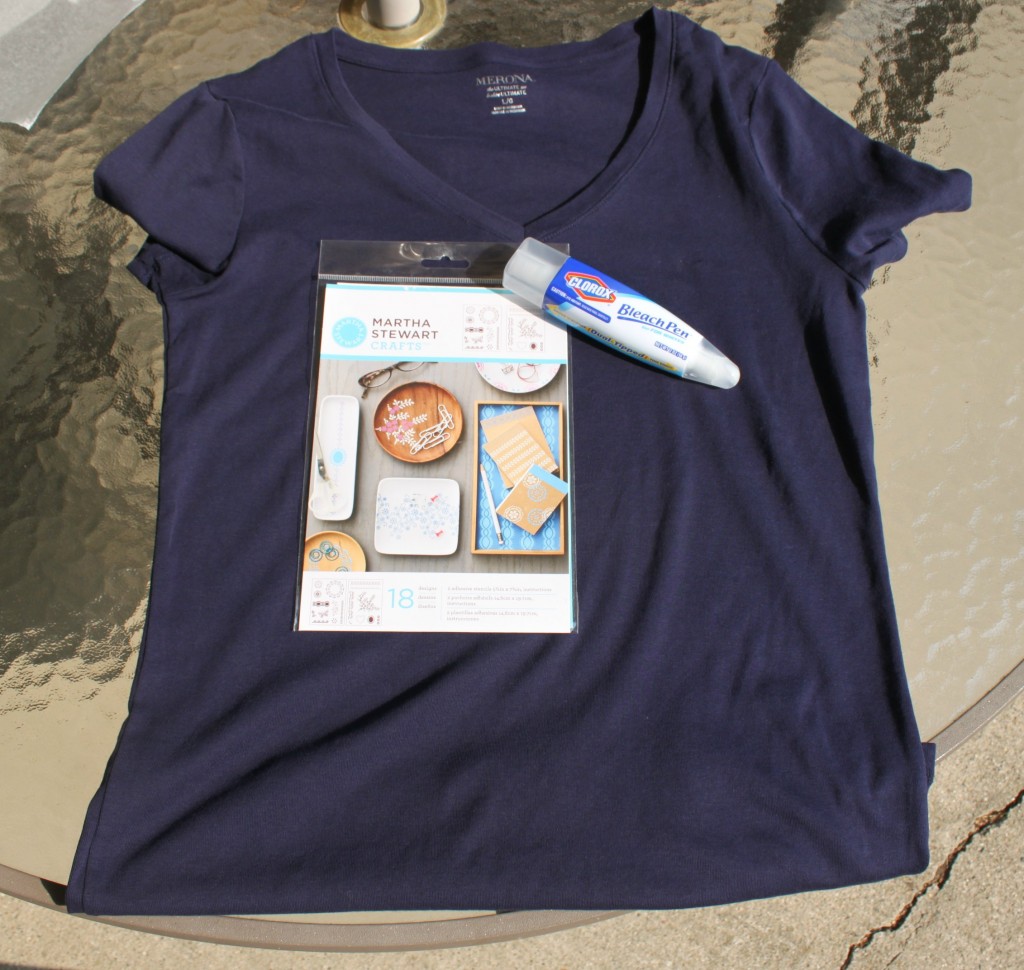 By the time I had traced the whole stencil. you could already start seeing the change. I let dry for 2-3 minutes after finishing before removing the stencil. Because I was using the stencil several times to create my pattern, I had to rinse and dry the stencils in between each use. This was very easy because of the quality of these stencils and didn’t lengthen my project more than about 10 minutes total. 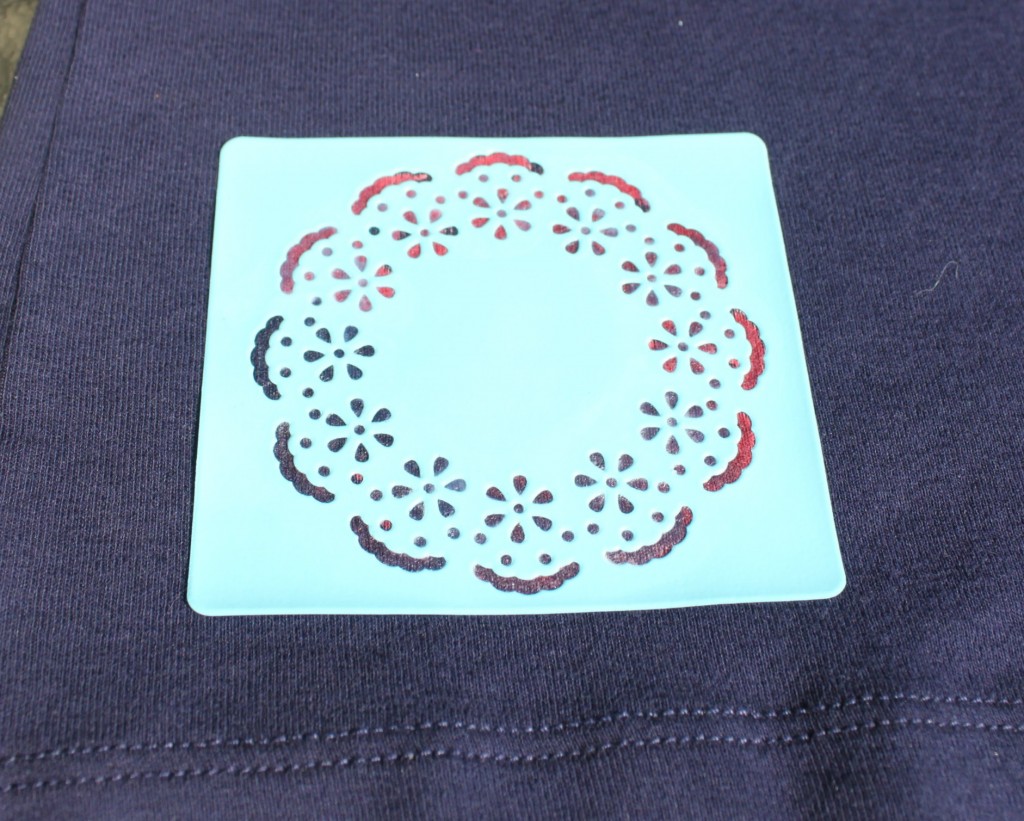 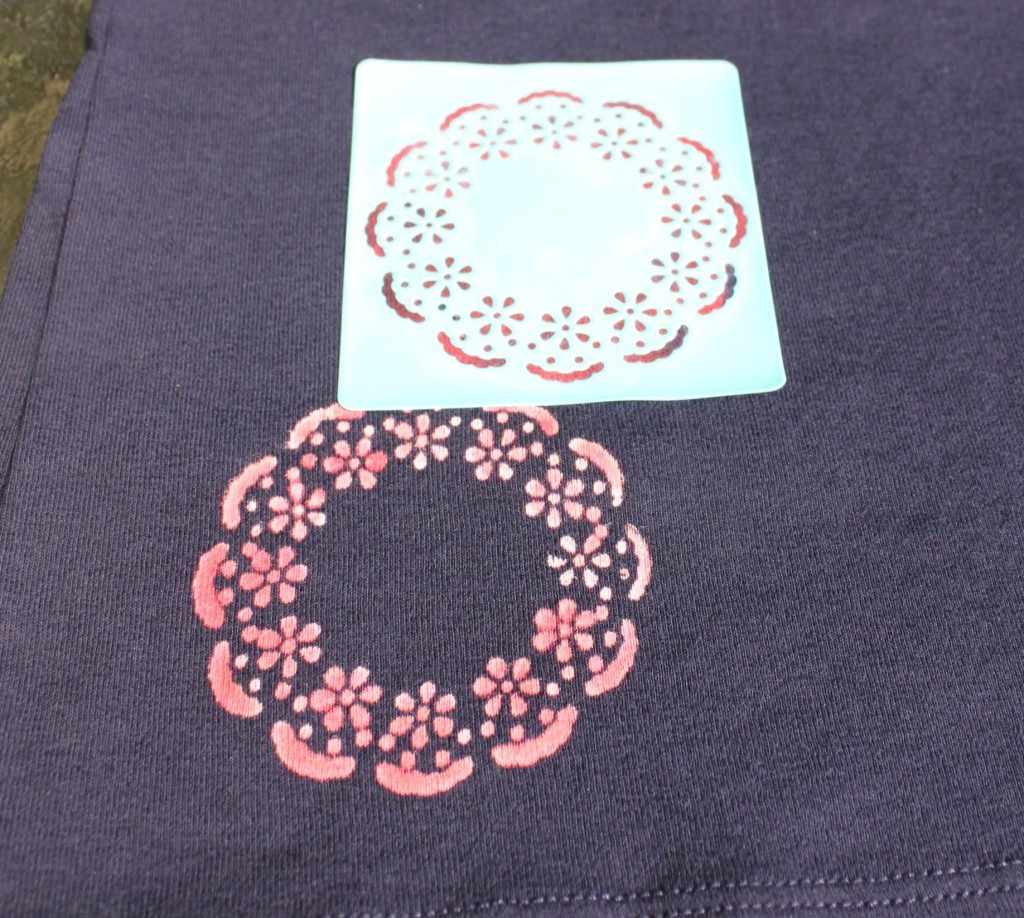 I didn’t completely plan out my design before starting, I had a general idea, and thankfully it turned out pretty well. I didn’t let this one dry as long towards the top before rinsing it out because I liked the ombre effect it provided. I didn’t think about the fact that the bleach would turn out reddish on the blue shirt, but it actually works out perfectly for the 4th of July. What I like even better is that the shirt isn’t really that holiday-ish and I can wear it after the 4th. 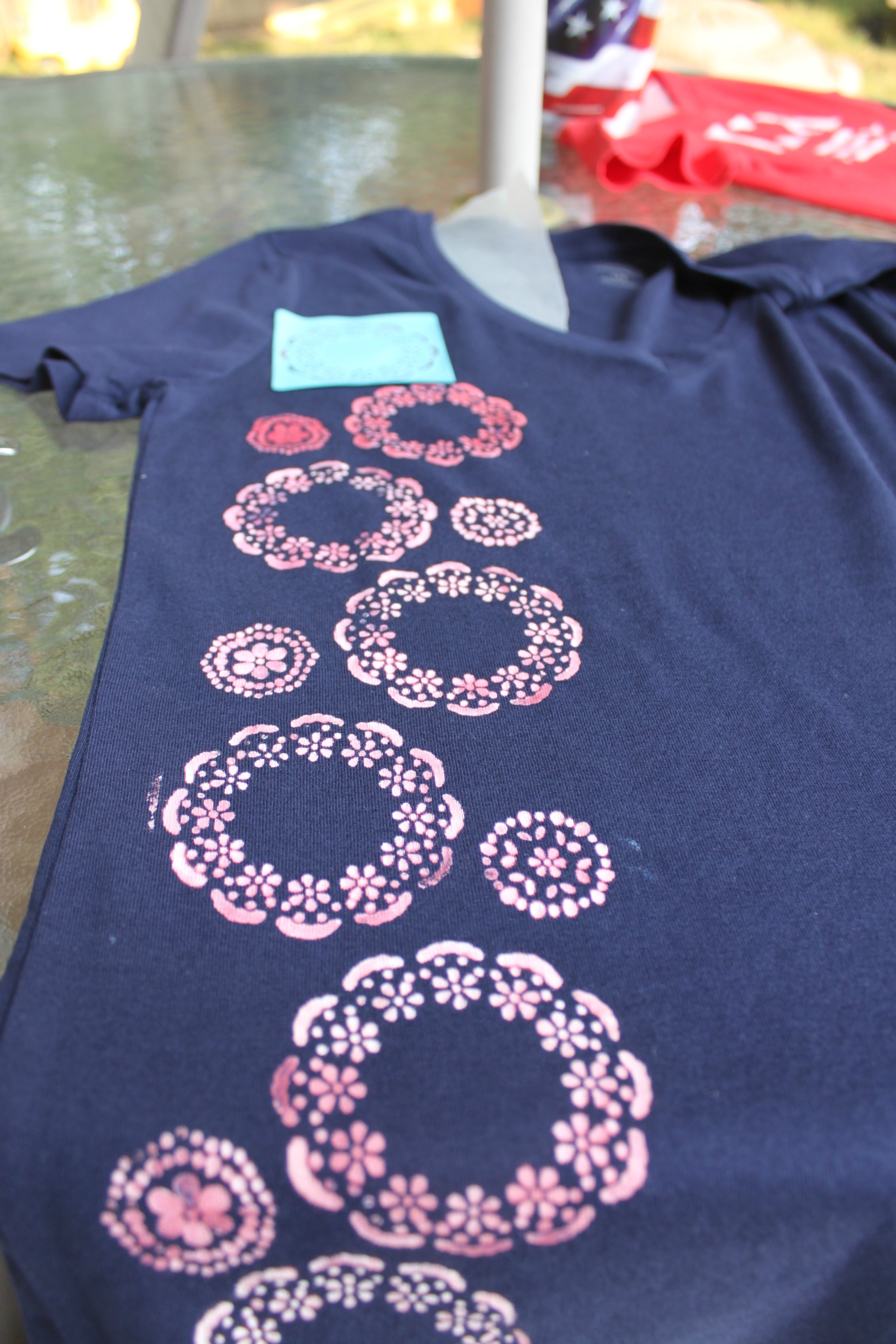 I’ll try to get some pictures of my son and I in our shirts on the 4th. My husband thought they turned out great, but he wasn’t keen on wearing a homemade shirt, so I didn’t attempt to make one for him. 🙂

UPDATE 7/5: Here’s a picture of us on the 4th of July as we were waiting for the fireworks. Carter and I are proudly wearing our bleach pen shirts. He’s such a cheese!