This framed burlap monogram with wedding year is a perfect wedding or anniversary gift. 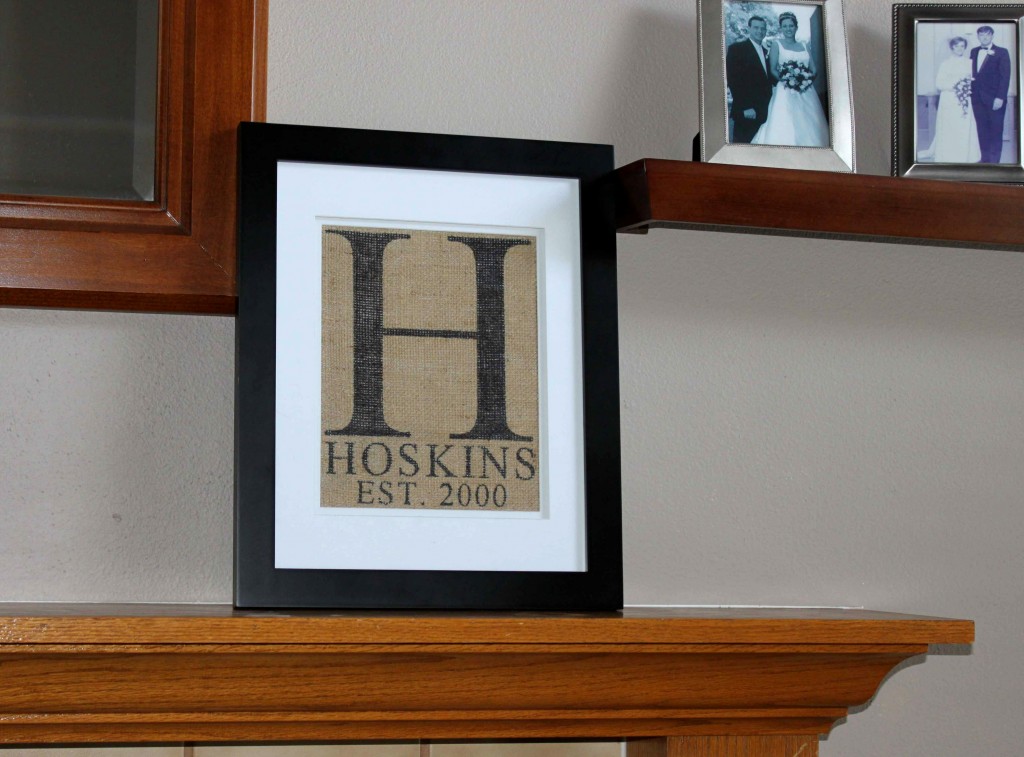 Here we go again, another monogram project. I’m working on an initial collection for our mantel to replace some outdated decor we had up for several years. I got the idea for creating a burlap monogram letter with our last name and wedding year from where else, Pinterest. The original pin is from an Etsy shop.

I first tried to replicate it as a holiday gift for someone, but because I didn’t have the right stencils on hand, I attempted to free-hand it. The results were not good! I knew I wanted to try to create the burlap monogram again, but definitely needed to use a stencil. I recently bought a Silhouette Cameo, and this was actually my first project with it. While this made the project go pretty quickly, you could create your own stencil by printing your design on cardstock and then cutting out with an Xacto knife.

This is a pretty straight forward project. Line up your stencil on your burlap and temporarily adhere it so that it doesn’t move around while you’re filling in the stencil. I made mine with vinyl on the Silhouette, so it had a sticky backing. If you’re using cardstock, you could use double sided tape or even temporary fabric spray.

Once you have your stencil lined up on your burlap, just use your Sharpie to fill in the stencil. I used a fine tip Sharpie so that I could be precise around the edges and in the smaller letters. I was afraid it might bleed through, but it didn’t. I think the original example used fabric paint, but I didn’t have any on hand, so I gave the Sharpie a try and was happy with the result.

Peel off your stencil. Frame your burlap. Tah… dah… it’s finished! I’m still debating whether to try out a darker color paper behind the burlap. The white that came with the frame shows through in bright lighting (like my camera flash).

I can’t wait to put this into my line-up for handmade gifts. It will make an awesome shower, wedding, anniversary or house warming gift.