Time for another week of Does This Blog Make Me Look Fat (DTBMMLF, now that’s an acronym!).

Here’s how I did for this week’s goals:

I was close on this one, although I forgot to put on my Fitbit on Monday, so I didn’t get to officially track (I hate that!). I’m estimating 5,000 steps for Monday, so I ended the week at an average of 9,251 steps daily. So close!

Here was my notable purposeful activity for the week: 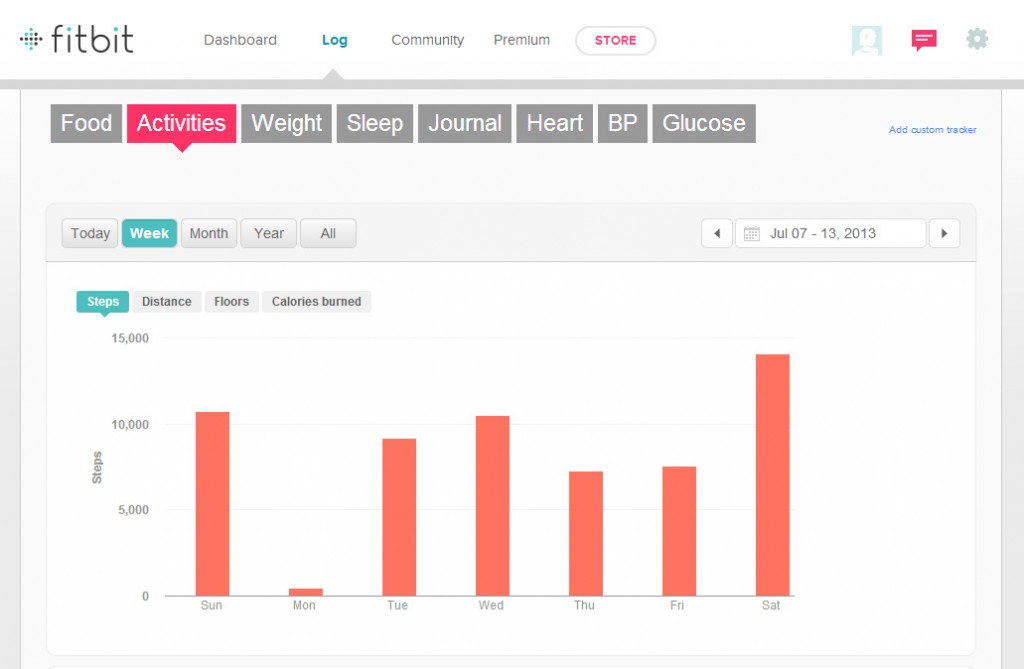 I only ran once this week and ended up running the first 2 miles of The Color Run without stopping and then ran intervals the rest of the way. I finished in 40 minutes which I was happy with. If you’ve never participated in The Color Run, I highly recommend it! This is the 2nd time for my husband and I and we had so much fun. It’s a great event for non-runners or first time racers. It’s not officially timed and there are a lot of walkers as well. If you follow me on Instagram, then you’ve already seen some of these photos. 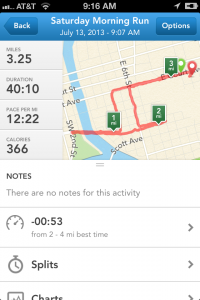 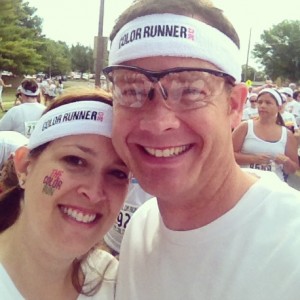 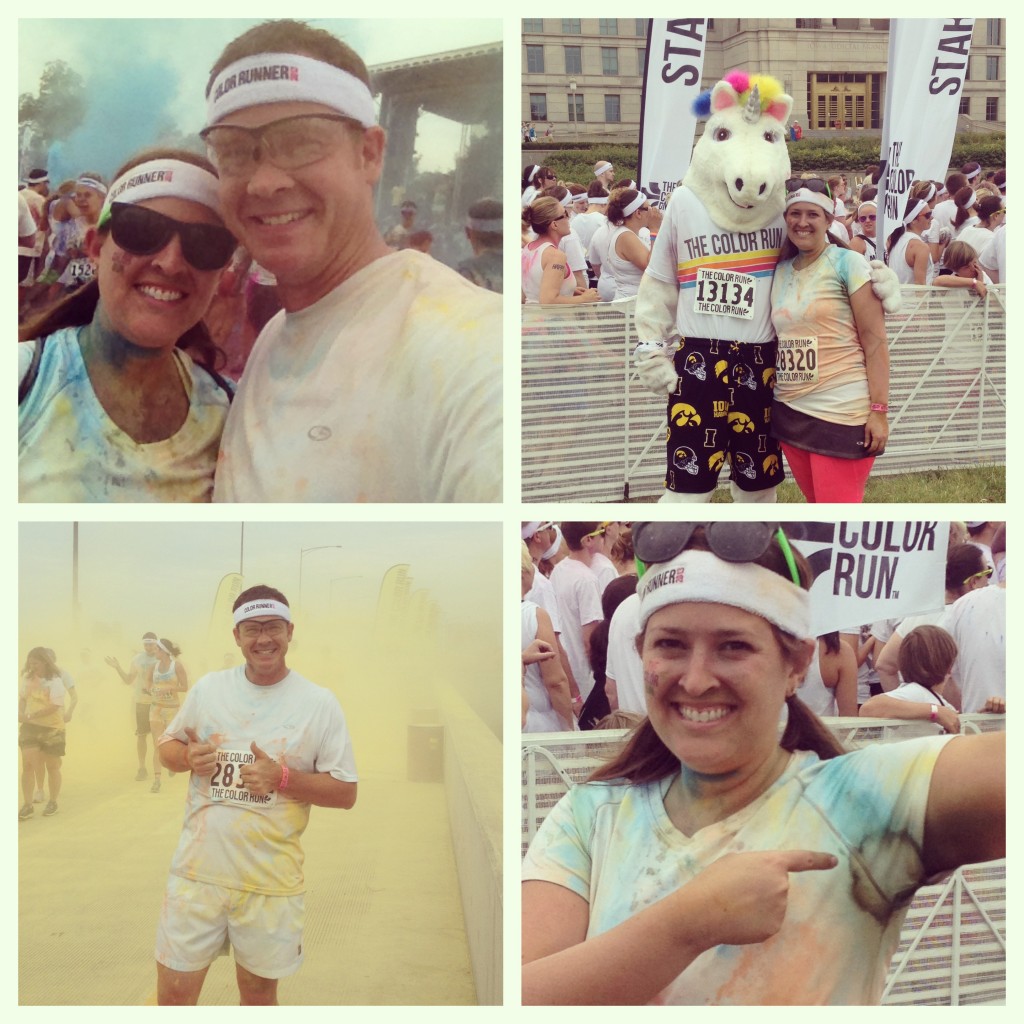 3) Drink less diet soda. Try to consistently get down to 1 per day.

Fail! No real change this week. It was one of those weeks!

I tracked 2 days this week – only the days I ate well though. If only the other days didn’t totally counteract that!

I’ve been promising a review of my Fitbit, and I’m starting that in this post. I realized though it may take a few posts to cover because I use it in conjunction with other apps too. I’ll concentrate today’s post on step and activity tracking. (I am not affiliated in any way with Fitbit, I just really like the product). The Fitbit is an activity counter that tracks your steps, distance, calories burned, floors climbed, and monitors your sleep. It syncs wirelessly to your computer or through your phone.

I use a Fitbit to track my activity everyday. I’m kind of a data junkie and like the feedback I get from tracking my activity. I’ve been using a Fitbit off and on since March 2011. When I upgraded to the Fitbit One earlier this winter, I looked at several other trackers like the Nike Fuel band, the Jawbone, and the Fitbit Flex. Ultimately, I chose the Fitbit One mostly for the same reason I chose the original Fitbit. I can wear it where no one can see it. if you follow my blog regularly, you know I like to wear (and make) bracelets. I just didn’t see any of these bracelet trackers fitting into my bracelet style. I can wear my Fitbit One all the time, with any type of attire. Let’s face it, if your’e going to track your activity, you want to track it all. If I’m at a wedding and dancing the night away, I want that to count!

I usually wear my Fitbit on my bra when I have a normal bra on and no one knows I even have it on. When I workout, I wear it clipped to my waistband of my shorts or pants. 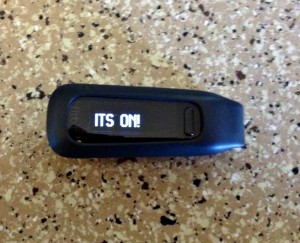 You’ve already seen part of the website where I show my weekly steps. The site is nice and very comprehensive with lots of charts and graphs that you can look at by day, week, month, year or choose a custom timeframe. You can set goals for each item tracked and measure your progress against these goals. I find the pie chart that shows my breakout of activity between sedentary, lightly active, fairly active, and very active to be helpful in motivating myself to get more activity each day. When you see it like this you realize how inactive you can be a majority of the time, especially when you have a desk job. The Fitbit has technology similar to a Wii or other gaming system that can detect motion, so it’s not just a traditional pedometer that counts steps, it can count your activity even when it’s not “step-related”.  You can also input additional activities you do using the site or their app to get credit for your other activities it may not track as accurately (like swimming or biking, etc).

Seeing my activity level and tracking steps makes me more motivated to add in small activities when I can in order to up my daily averages. I’ll take the stairs at work instead of the elevator, park farther away in a parking lot, take the long way home from the park, and so on. If I’m close to reaching my goal at the end of the day, I’ve been known to take a late evening walk around the block just to reach my goal.

I generally use the iPhone app rather than the site to both track and sync. You can track and monitor all of the same things as the site. There are a few less graphs, but the core information is there and it makes it so convenient since I have my phone with me virtually all of the time. Plus, it will send you little motivating messages if your’e close to reaching your goal or have hit it. 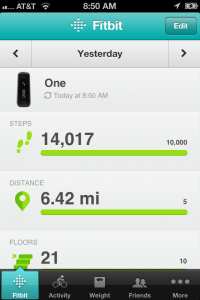 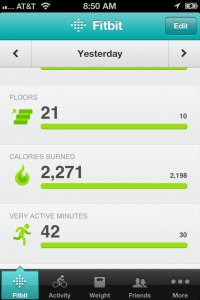 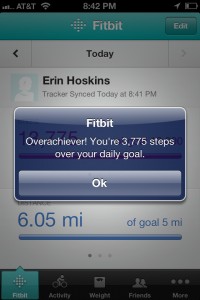 They have the same level of information with tracking your food, weight and sleep. You can also connect with friends who also use a Fitbit or connect with people in the community for motivational challenges.

One thing I like best about the Fitbit is that they’ve partnered with other applications to be able to sync and not have to enter information multiple times or transfer it between apps. I use My Fitness Pal for tracking food and it seamlessly syncs with the Fitbit for calorie tracking. I’ll cover the other features in the Fitbit related specifically to calorie tracking and sleep tracking in upcoming posts as I work on goals for these areas. I’ve got a lot of work to do to get back on track!

I will say, it is often a trade off for me between being active and working on diy/craft projects and those blog posts. I need to figure out a good balance. I’d really like to start getting up in the morning to work out. I’m so not a morning person, but I’ve done it in the past. I also need to plan my projects out better so I’m more efficient when I sit down to do them.

Linked Up At: Operation Skinny Jeans; KTJ Weighing In