The Jedi Training Academy at Disney’s Hollywood Studios was a great experience. Check out these tips on getting your child signed up and know what to expect before you go. 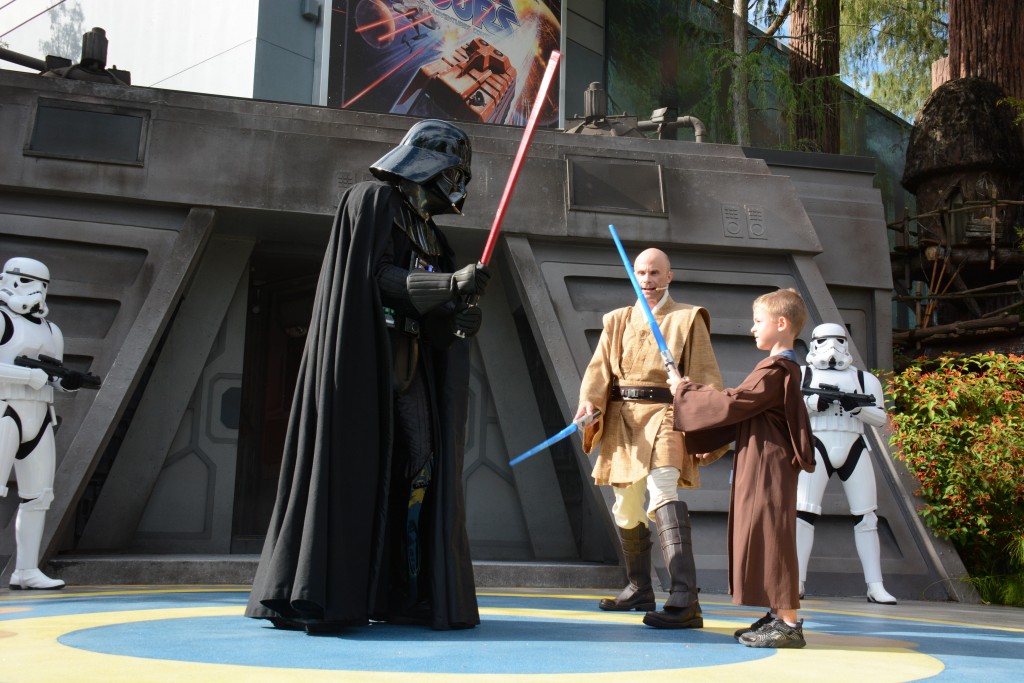 One of the only things my son Carter really wanted to do while at Disney World was the Jedi Training at Disney’s Hollywood Studios. He had heard about it from some other kids. Unlike several of the other experiences, shows and attractions at Disney World, you can’t register in advance to be a part of it and they only take about 200 kids a day. It was hands down Carter’s favorite thing he did and we’re so glad he had the experience. Todd and I just wish they accepted adults too!

Get there Before Park Opening:

They do Jedi Training registration right at park opening. You need to be there before park opening and stand in line to get a spot. If the park opens at 9 a.m. plan to be in line at least by 8:30. If there are Extra Magic hours that day, this counts as park opening. If you don’t qualify for Extra Magic Hours plan for a different day to go so you’re there right away.

Although I shouldn’t have been, I was actually very surprised at how organized and orderly it all was. When we first got to the park entrance there was an employee with a sign (and light saber) asking if we were doing Jedi Training and directed us to a special line. They were counting kids and indicated whether you would get a spot. This saves you from standing in line if you won’t get a spot.

Then they had the whole group walk together in an orderly fashion (March of the Jedi) to the sign up area by the ABC Studios area. They took us into the building and registered each child via a tablet connected with the computer system and worked with you on which time slot you would have. They asked each child questions about whether they could follow directions and would listen to the instructors. They handed you a paper ticket with your time slot on it and directions for when to return and where.

We got the last time slot in the first session at 9:15 a.m., so we went directly to the training area. 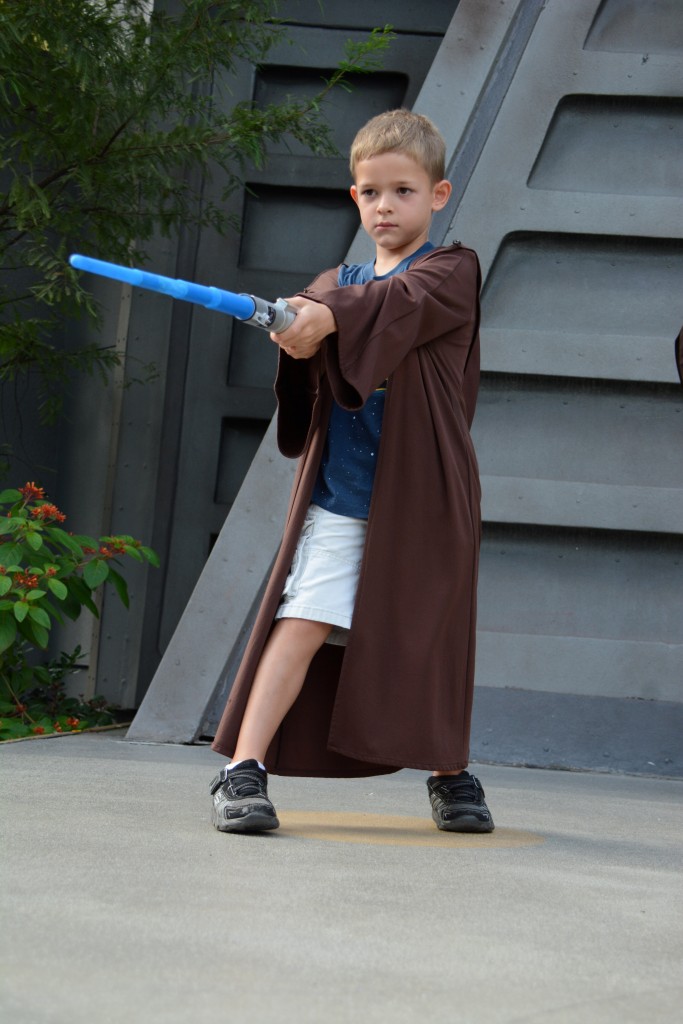 Each time slot has 15 children in it, so it’s a pretty small group of kids. It lasts about 25 minutes. They gave each child a Jedi robe to wear for the training and lined them up shortest to tallest.

Then all the kids took to the stage and practiced how to activate and deactivate the light saber and the moves they would need to do to defeat Darth Vader. 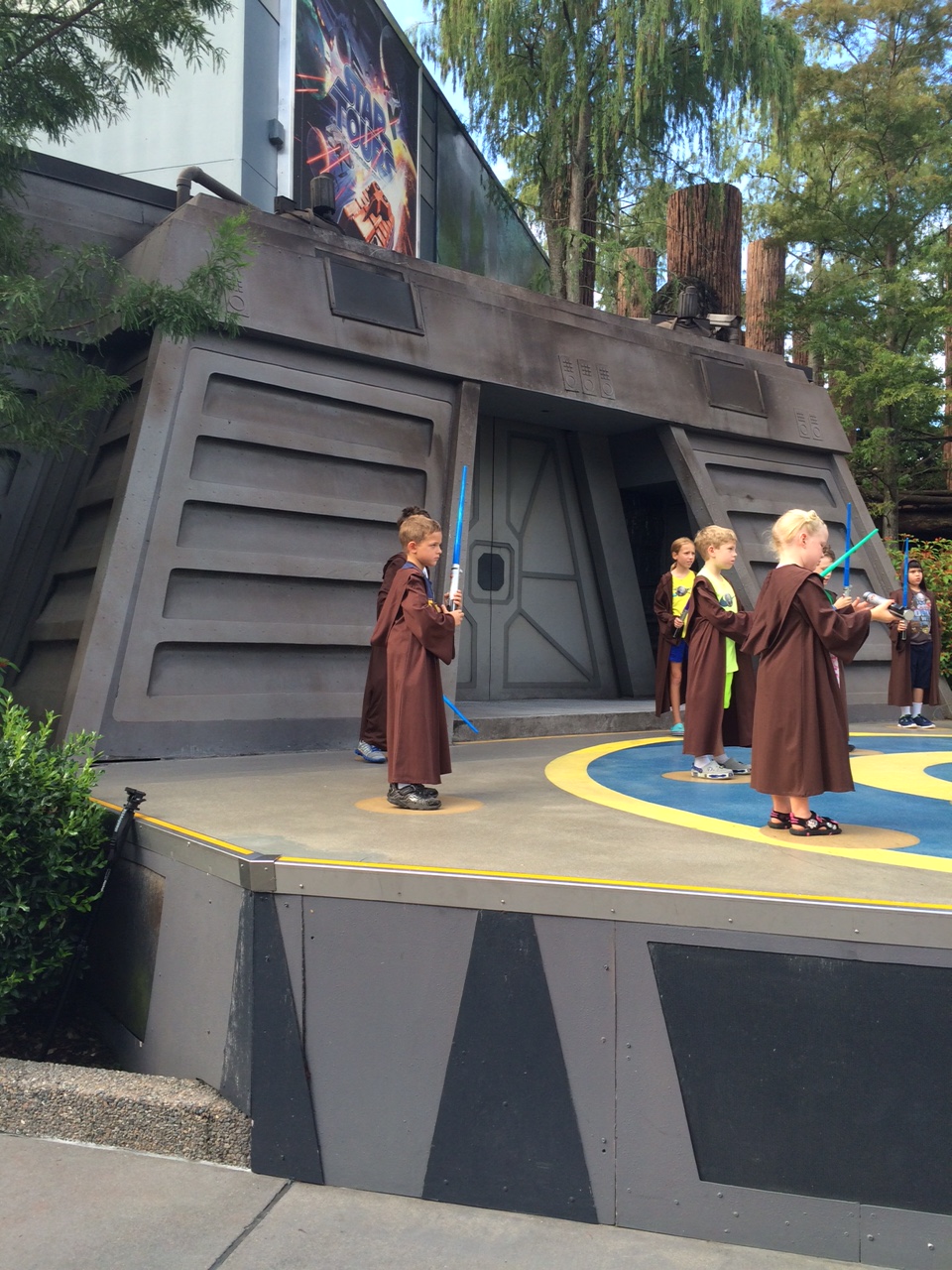 The instructor was top notch – great with kids and a fantastic entertainer. He was funny, and it was enjoyable to watch all the way through.

Next they had each of the kids take a turn battling Darth Vader as the instructor helped them through the routine. Here was Carter in his battle against Darth Vader.

They finished by handing each child a diploma.

Because the groups are small, there is plenty of room to watch your kids on stage and there was no need for parents to be edging each other out for taking pictures. Again, I was very happy with how orderly and organized the whole experience was.

They have a Photo Pass photographer taking pictures. He captured great shots of each and every child. We had pre-purchased the Memory Maker package and this made it worthwhile in and of itself. He or she will either hand each parent a Photo Pass card or scan your Magic Band. 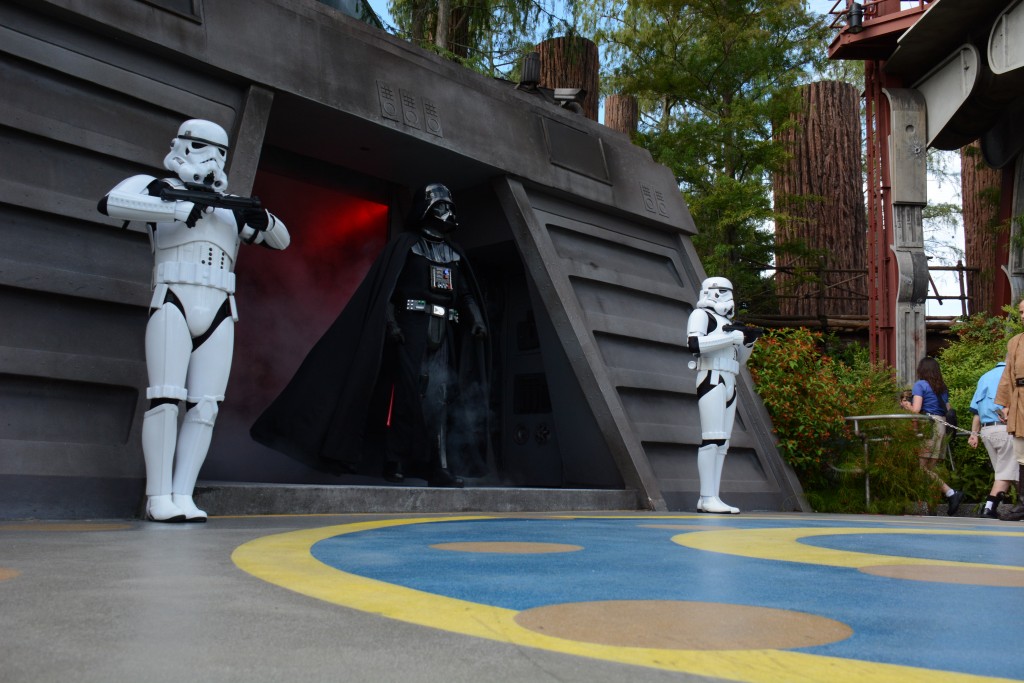 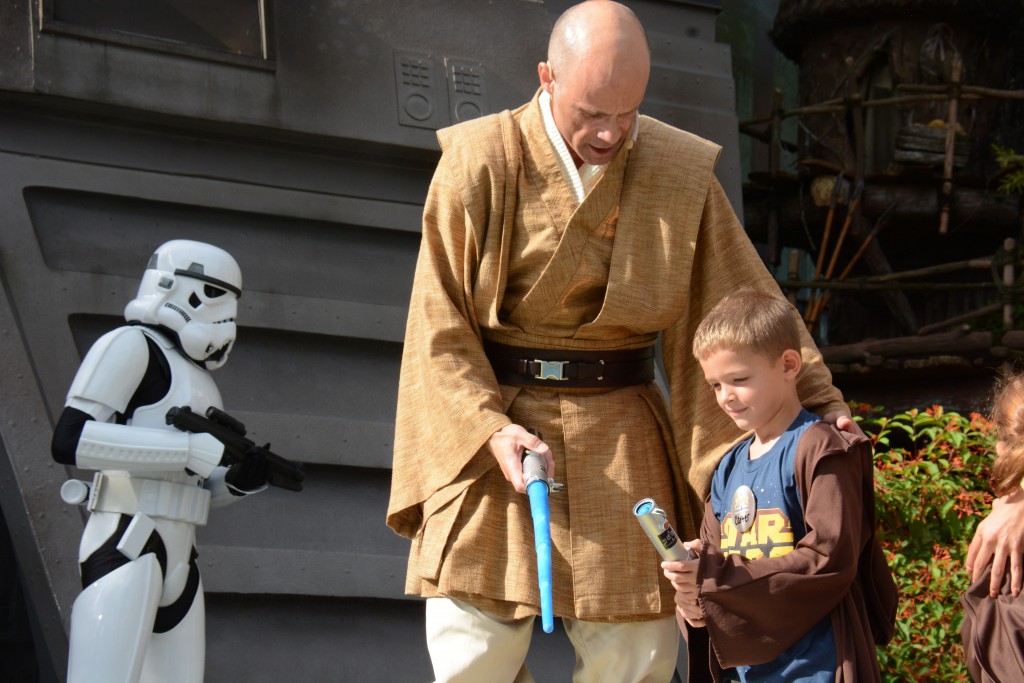 If your child is a Star Wars fan at all, try to do the Jedi Training Experience. All of the kids were so excited about it afterwards. There was one child who got a little freaked out by Darth Vader and decided to leave the stage during the individual battles. If you think your child will be frightened, try to prepare them ahead of time for what to expect, or they can choose not to do the individual battles.

Doing Jedi Training, plus going through the Star Tours ride and then building his own droid in the store afterward pretty much made Carter’s day. 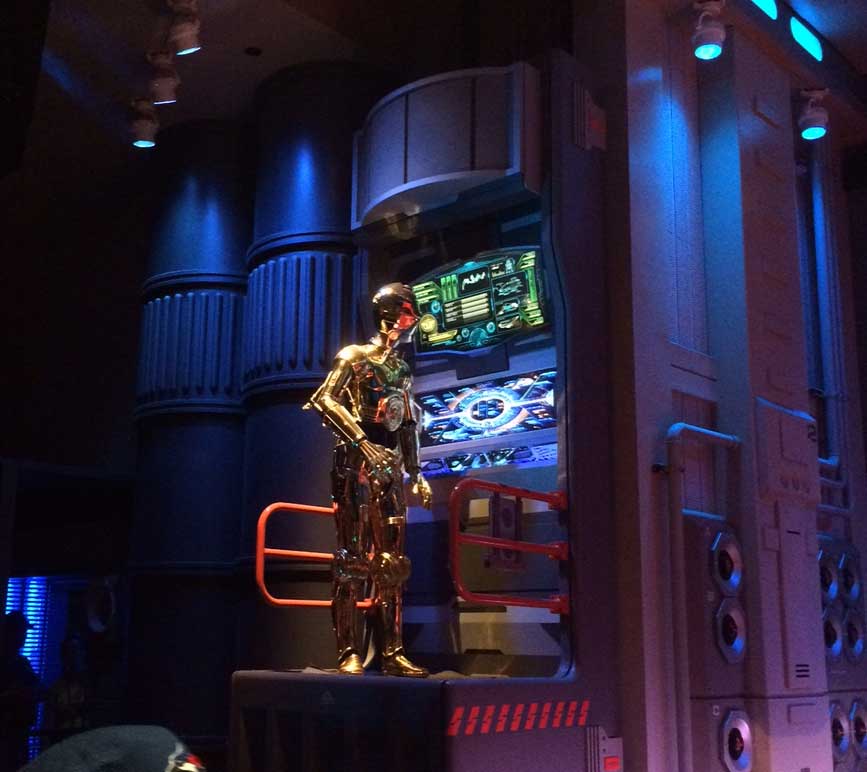 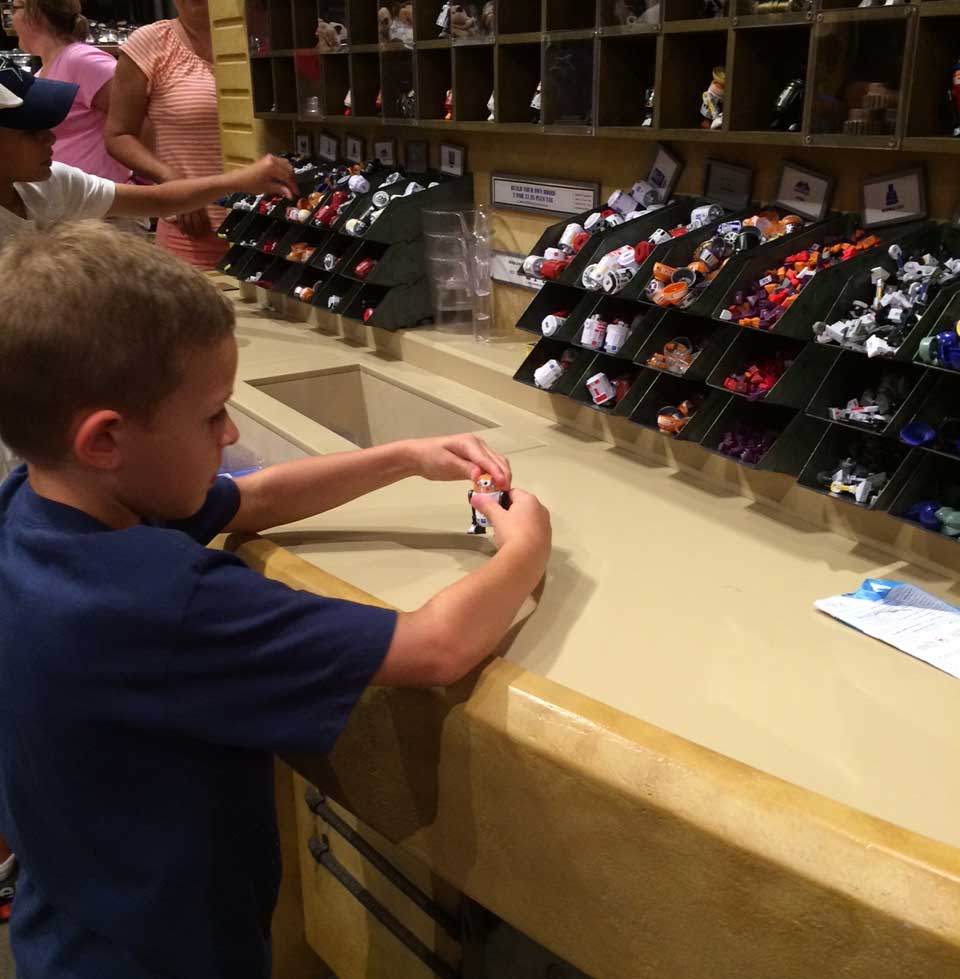 If you have a Star Wars fan in your family, Hollywood Studios just might be his or her favorite of all the Disney theme parks!