It’s un-officially pumpkin week at our house. Today my son and I carved and decorated pumpkins. A monogram pumpkin for me and a painted and felt pirate for him. Then I roasted pumpkin seeds which we’ll be snacking on all week (or at least through tomorrow) and later this week I’m making pumpkin bars – one of my very favorite fall treats! 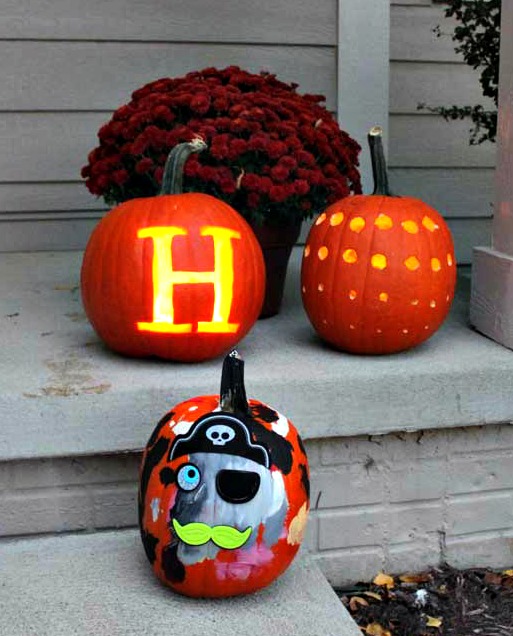 It’s no secret that I like monograms, so it’s fitting that most years I carve some sort of monogram pumpkin for our front porch. It looks great lit up, and it’s one of the easiest things to carve. While I have patience for a lot of projects, for some reason pumpkin carving isn’t one I can give over several hours to, knowing it will last a few weeks at best.

I start by printing off a stencil made in Microsoft Word. I usually print a few sizes to see what will fit my pumpkin.  Then I tape my stencil to my pumpkin. (If you have an initial that has pieces that will need to “hang” like the open part of a P or O, then I’d suggest using an actual stencil.) 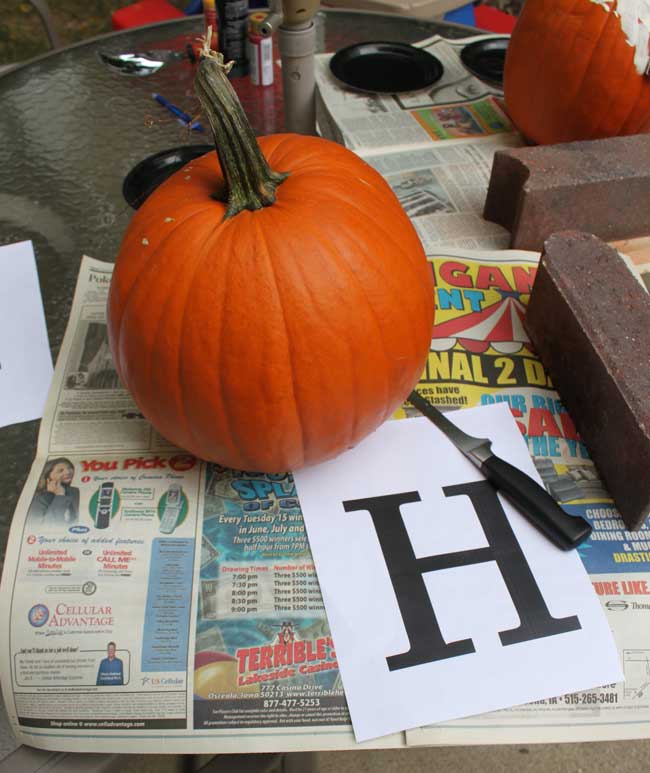 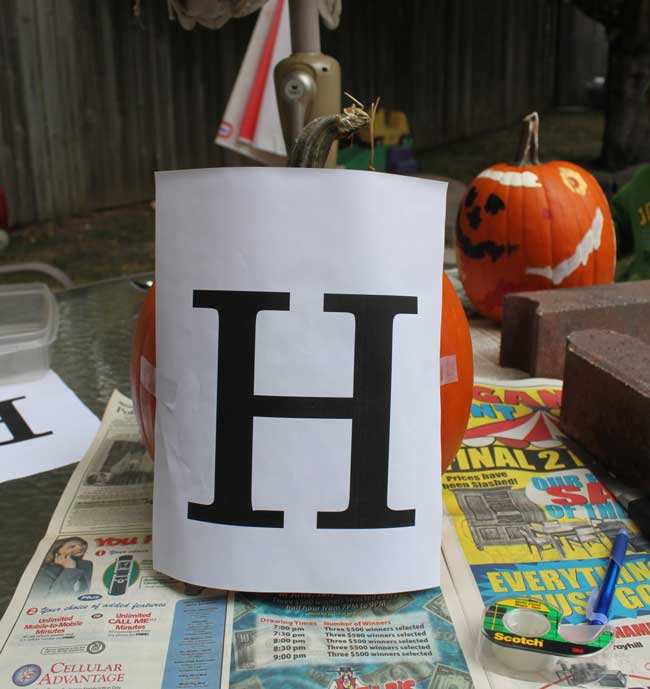 Next I used a ball point pen to trace my stencil, pushing hard enough to score the lines onto my pumpkin. Then I removed the stencil and trace it with my pen. You could try to cut from the scored line, but I usually can’t see it quite well enough. 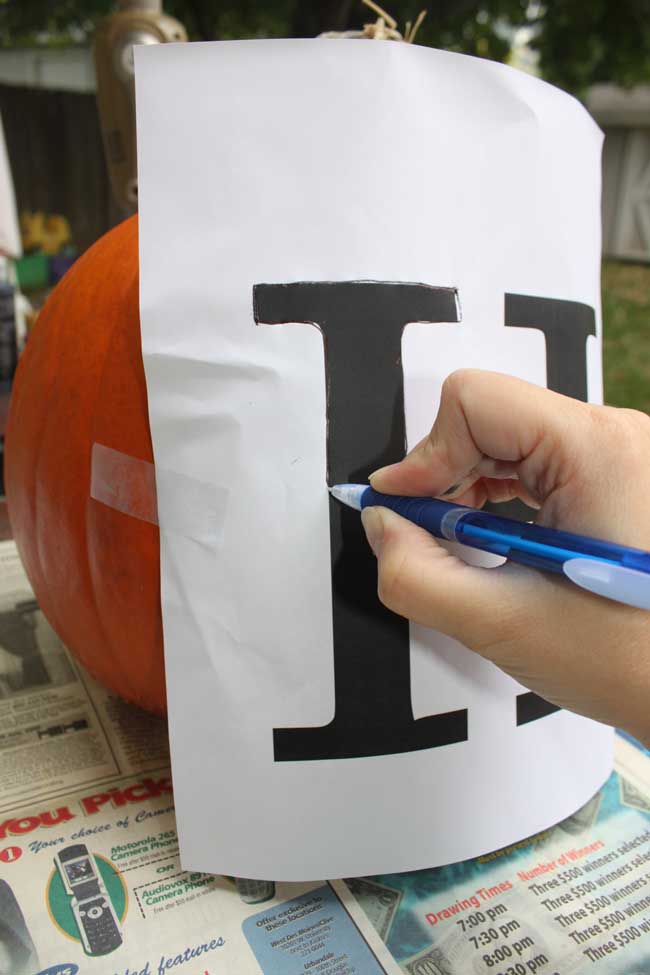 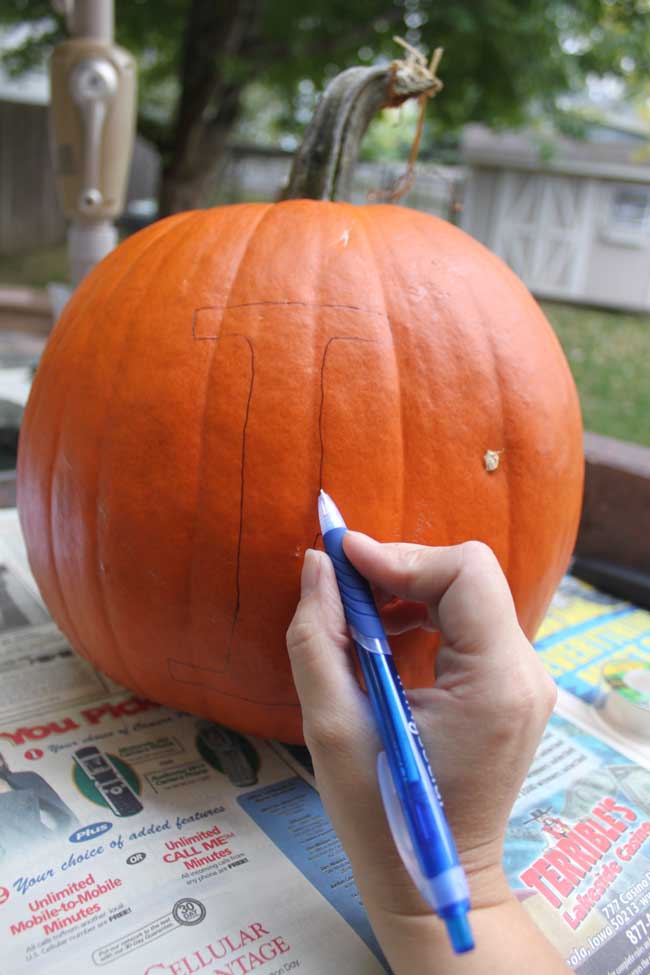 Next I used a sharp knife to carve around my traced monogram. To make removal of the cut out pieces easier, I cut straight lines next to the smaller pieces where I can.

I popped the top off and then cleaned my pumpkin out before carving it. You could do it first before drawing your stencil as well. 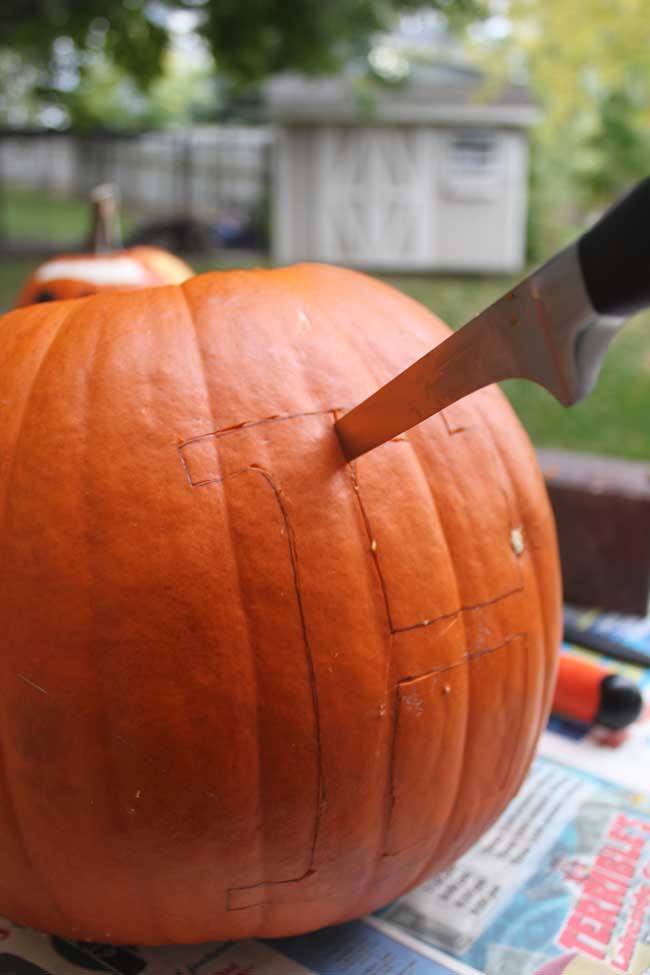 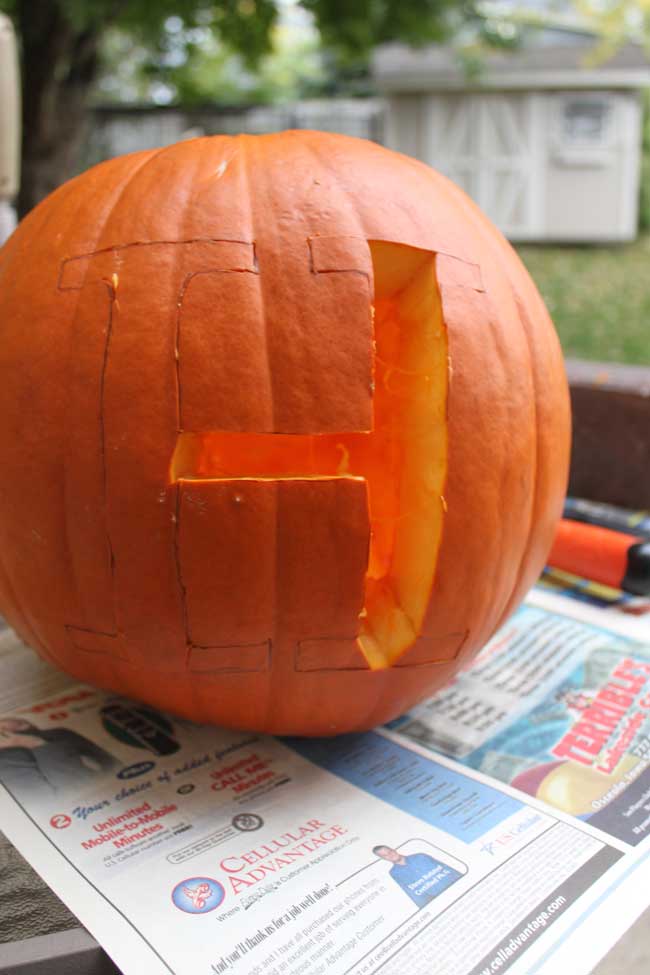 Even when you’re careful, sometimes if there are very small pieces that are holding up your design, they may come off. This happened to the bottom part of my H. No problem – I just used a toothpick to reattach. I broke my toothpick in half and inserted into the part that came off and then to the inside of my pumpkin. 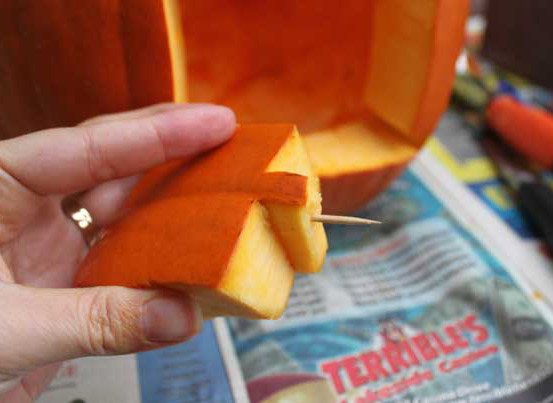 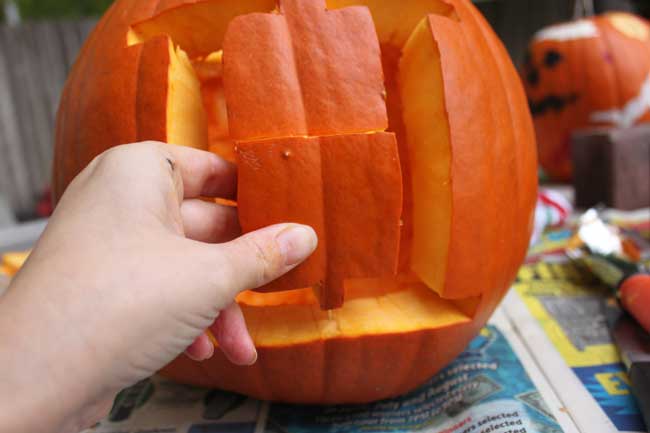 Clean up any edges or extra pumpkin strings, and you’re done! 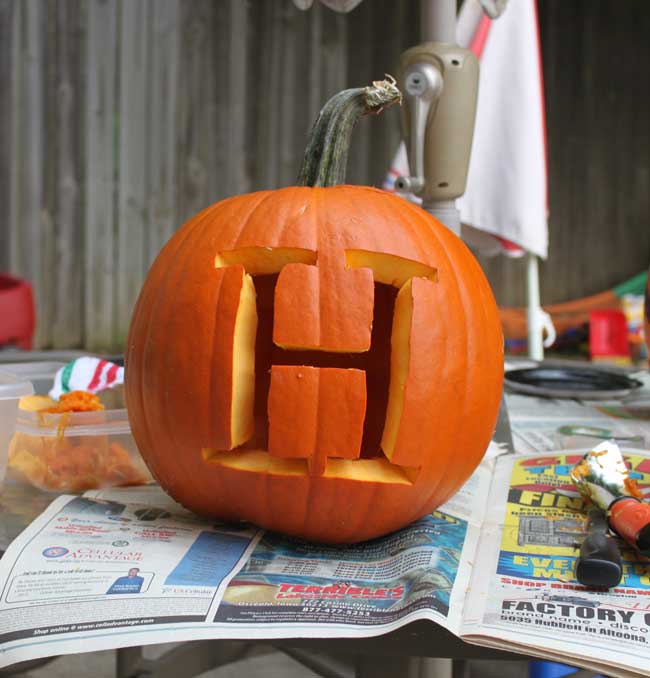 And here it is all lit up. It’s next to a pumpkin I did at a pumpkin carving party for work. I used different sized drill bits to try to make an ombre circles design. 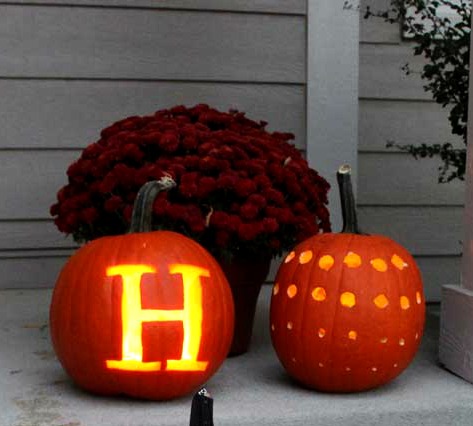 Carter painted a pumpkin while I was carving. I had picked up a little stick-on pirate face in the dollar bin at Target. He loves to paint and it was a great day to be outside. 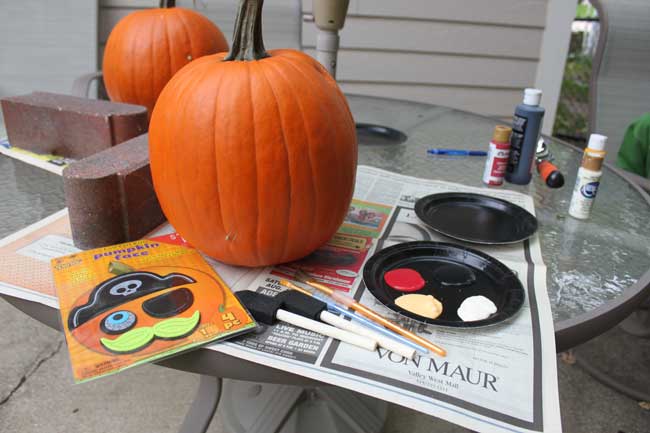 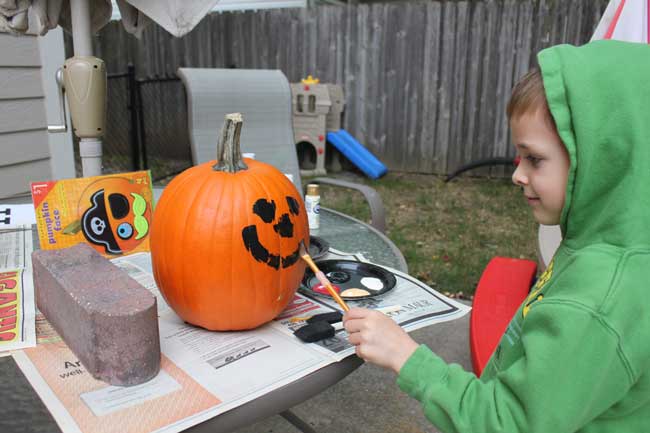 He went to town painting each side a little differently. He started out with a pretty good smiley face and then went pretty abstract everywhere else. Once he was done, we picked the side that he thought would look best with the pirate face. The side where he was mixing colors almost made it look like the pirate had a beard. I loved the felt stick on face. It would be easy enough to make yourself, but for $1, you really can’t beat it. 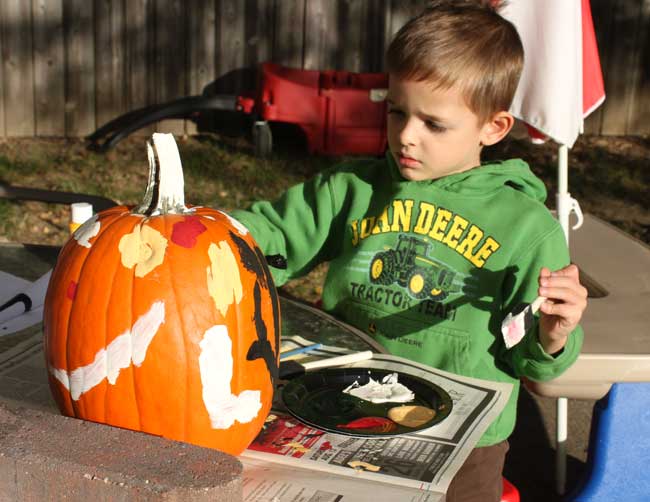 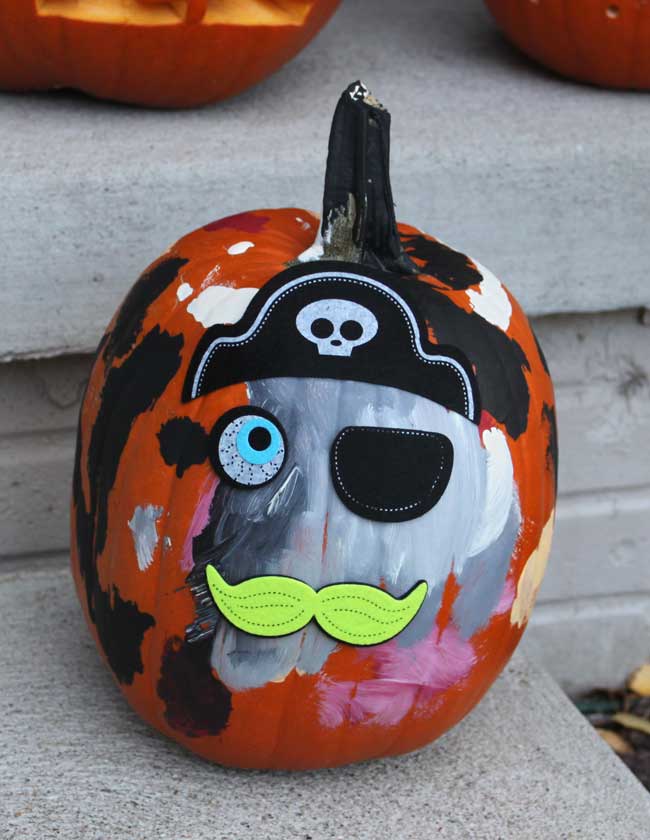 Here are our masterpieces on our front step.

Roasted pumpkin seed and pumpkin bar recipes to come later this week! Off to get ready for the work week.