These tooth fairy pockets are a great tradition to use for keeping the magic of the tooth fairy fun and simple. Step-by-step instructions for both sew and no sew versions. 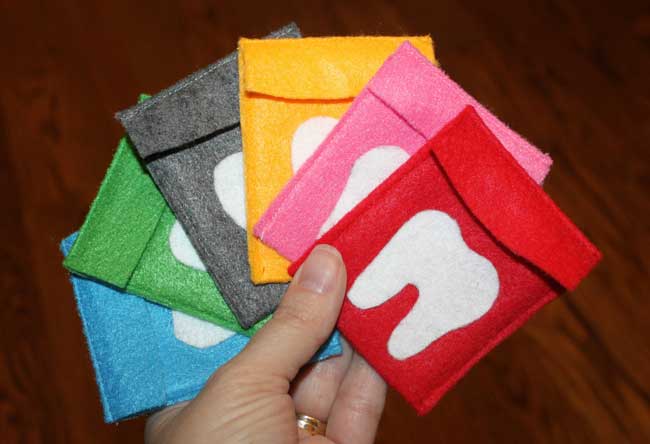 We’ve hit a new milestone in our house, Carter just lost his first baby tooth over the weekend. It’s been loose for a few months but got extra wiggly lately (which I have to admit was really gross!). As he worked on getting it out, I searched for creative tooth fairy ideas. I was originally planning to make him a small pillow with a little pocket on it, but then I ran across an idea for making tooth fairy pockets from Heartmade. Carter was pretty excited about the prospect of having the tooth fairy come, mostly related to the fact that he’s seen the movie Rise of the Guardians a few dozen times.

These are really simple to make. (Check out the no sew option toward the end.)

*Some supplies links may be linking to affiliate links on amazon.com or other trusted retailers.

First cut out your template and trace and cut out your felt. I used six different colored felt pieces since I still had leftover felt from making superhero masks. 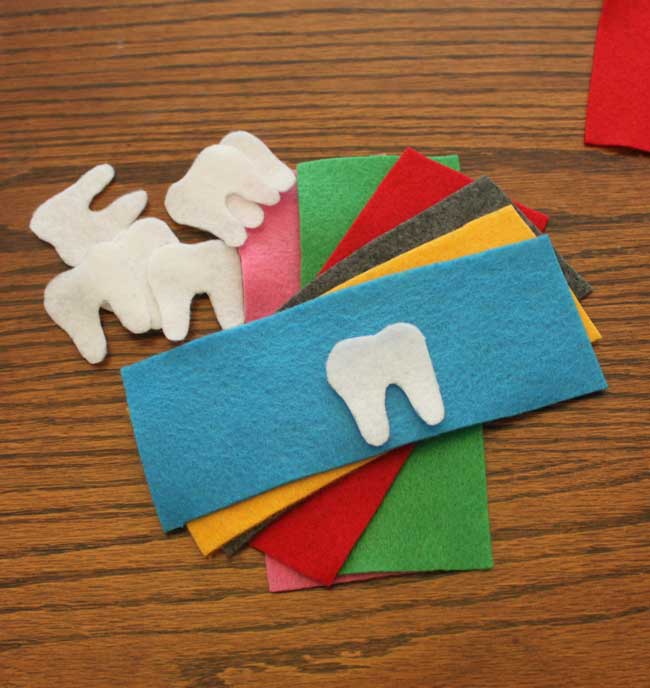 Then I cut out my fusible web in the shape of the tooth pattern, one for each pocket. Following the directions, I adhered the fusible web to my felt tooth, ironed the fusible web to the tooth felt piece and then removed the backing, then ironed on the tooth to the felt pocket piece. I folded the rectangle felt piece first into the pocket shape to determine where I should iron on the tooth. (You could also use fabric glue to adhere your tooth shaped piece to the pocket, which I did later in the no sew option.) 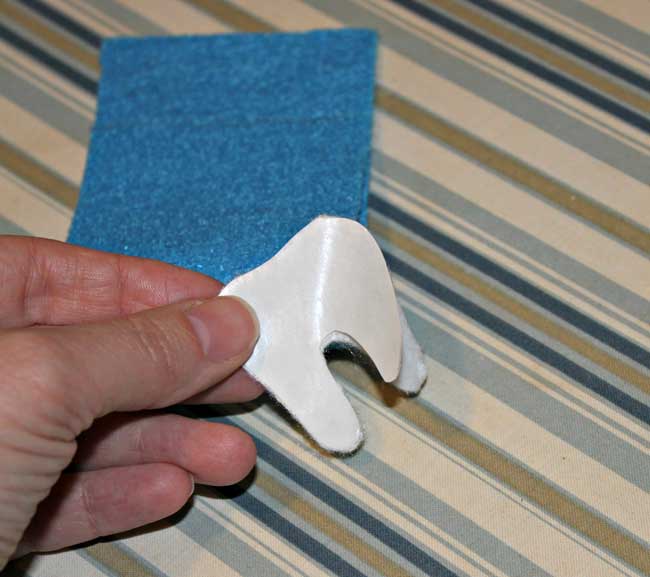 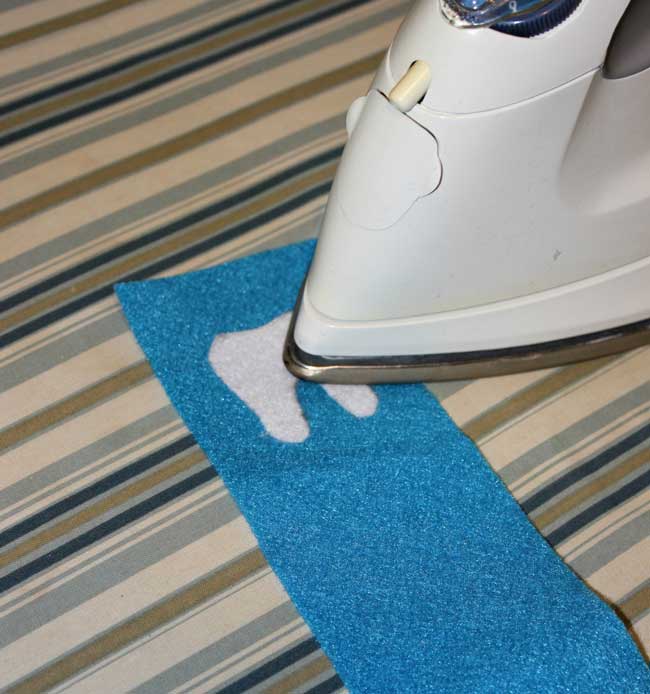 Once my tooth felt piece was ironed onto my rectangle pocket piece, I folded up the pocket and ironed it to make it easier to sew – and so I wouldn’t have to pin the edges together. 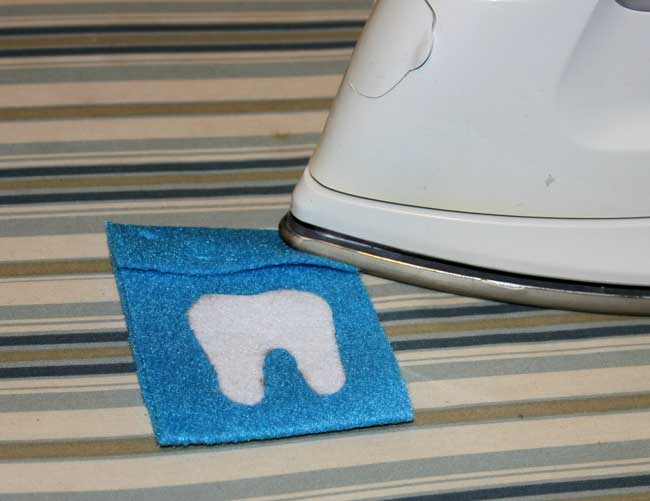 Then I went to my sewing machine and using coordinating thread with my pocket felt color, I sewed the two sides and bottom together. 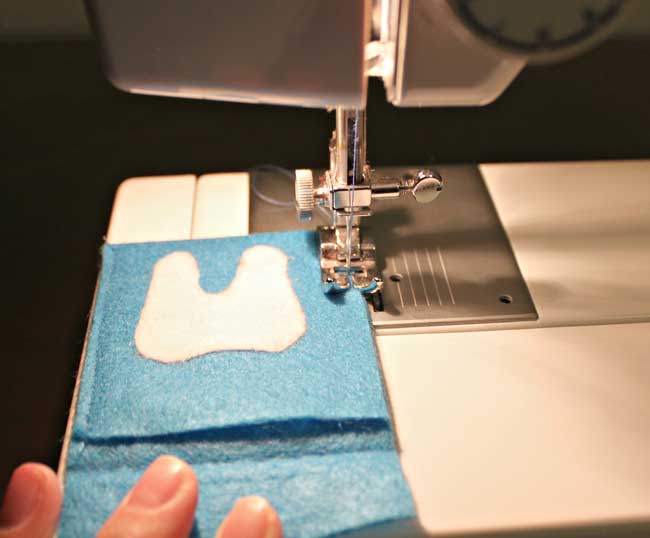 The pocket would likely stay closed just fine with the top flap just having been ironed down, but I liked the look of the finished sewn edge at the top, so I folded down the top flap and sewed a very small edge, being careful not to sew the pocket shut. 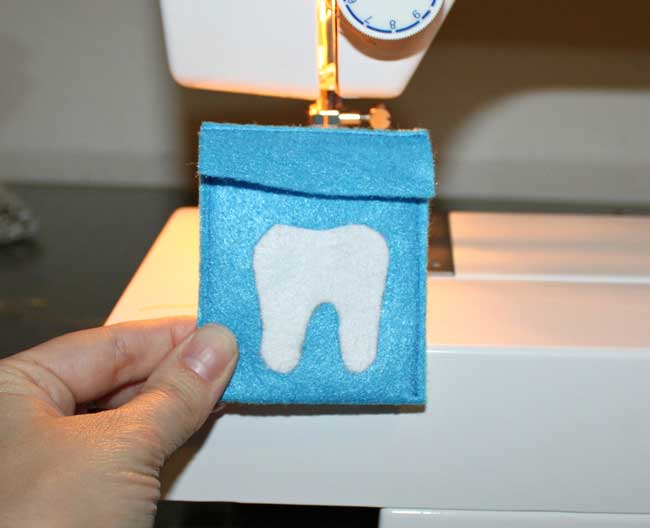 Todd and I talked a little bit about what we wanted to do for the tooth fairy and decided that she would leave a gold dollar coin in it. We didn’t want to go over the top with money but thought the gold dollar would help make it special. Unfortunately, when the big event came, we were scrambling around trying to find the gold dollar coins we thought we had… no luck! We settled for a $2 bill that we had on hand. Carter apparently remembered we had said the tooth fairy would bring a golden coin, so he was a little disappointed, but got over it quickly. Thank goodness he’s an easy going kid. 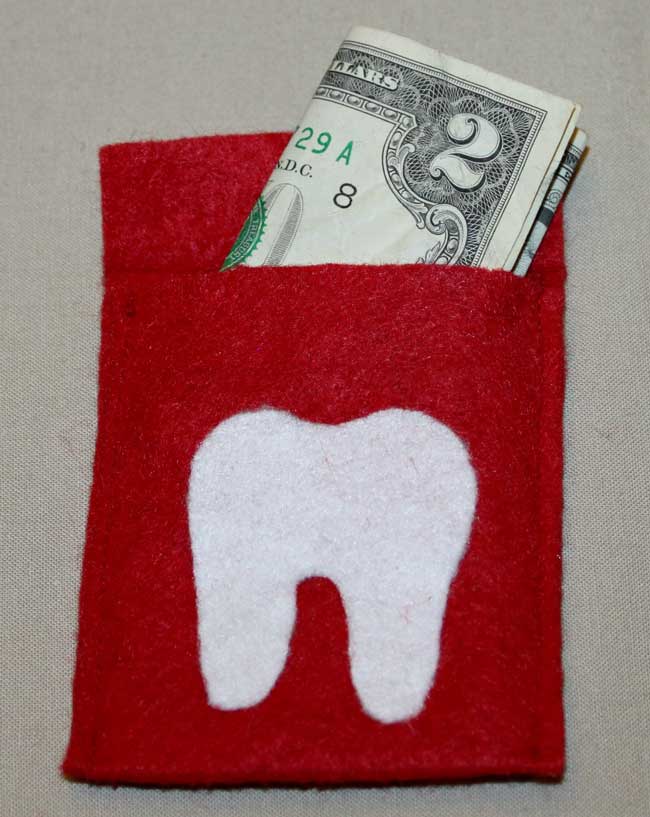 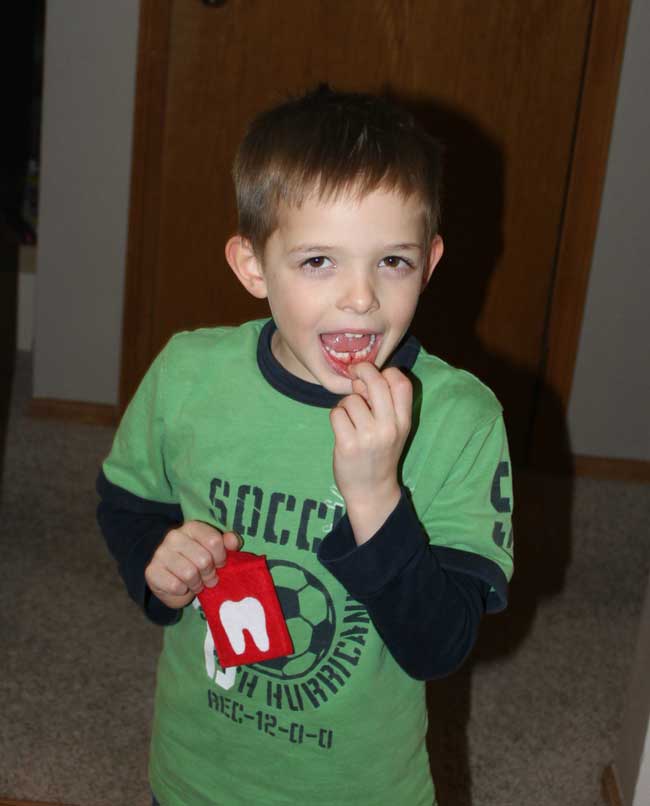 I made several colors so that we could change it up a bit each time. I let Carter pick out what color he wanted to use for his first tooth, and he chose red one. Apparently we didn’t explain the tooth fairy process very well. He woke up at 4 a.m. and ran downstairs saying that the tooth fairy hadn’t come because the pocket was still under his pillow. Once we told him maybe he should look inside the pocket, he realized she had replaced his tooth with the money. Thankfully he was able to go back to sleep after that!

These would be fairly easy to hand sew, but I know a lot of people don’t want to go to that effort if they don’t have to, so I wanted to show a no-sew version of these. No-sew directions: After you’ve cut out your shapes, simply fold up your pocket to determine the proportion for the front piece and the flap. You may want to iron it so you can easily see the crease. Put a small line of fabric glue on each side of the inside of the front of your pocket. Fold over to glue to the inside of the back side. Put something a little heavy (a book works nicely) on top of it to hold the pieces together while the glue dries. I let dry for about an hour. Then I put fabric glue on the back of the tooth shaped felt and glued it on to the front of the pocket, again setting a book on it for drying. Finally, I ironed down the top flap.

We decided not to to get extremely elaborate with the tooth fairy, but when I was looking for ideas, there are a lot of really creative ideas out there for making the tooth fairy fun for your kids. Here are a few of my favorites, click on the links or the images to go to the original posts. 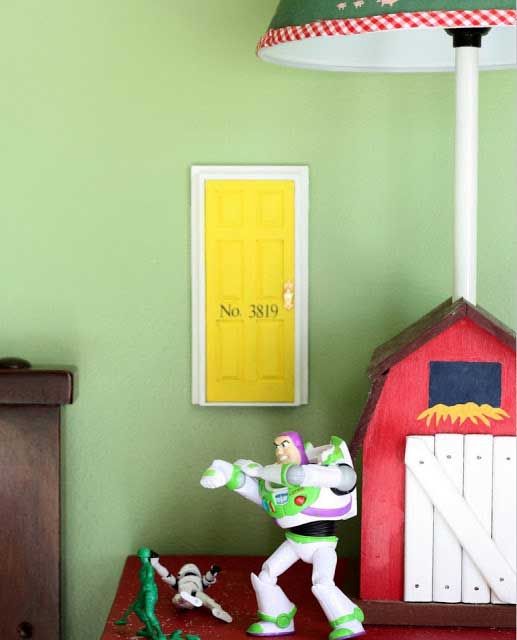 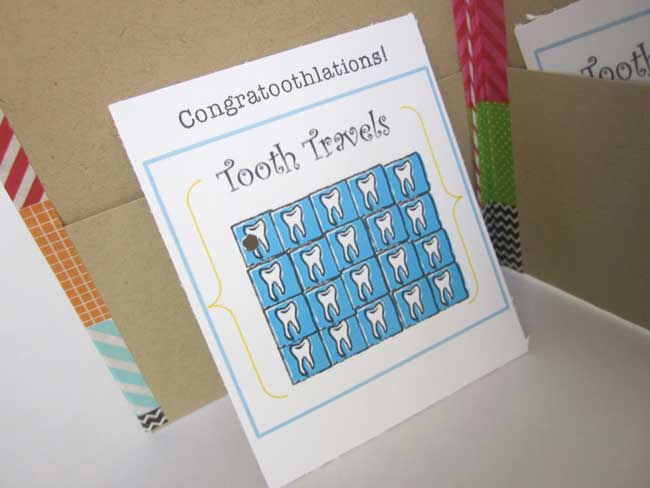 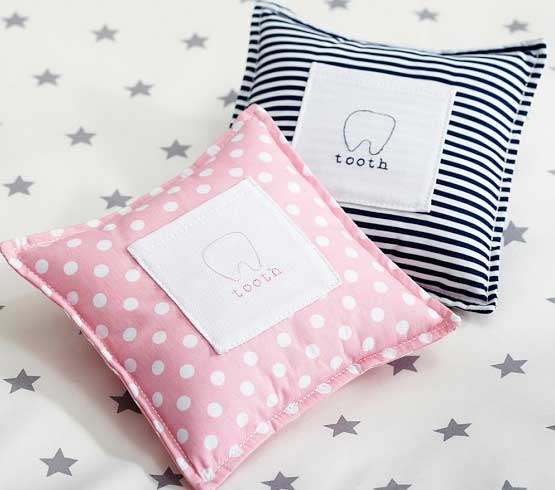 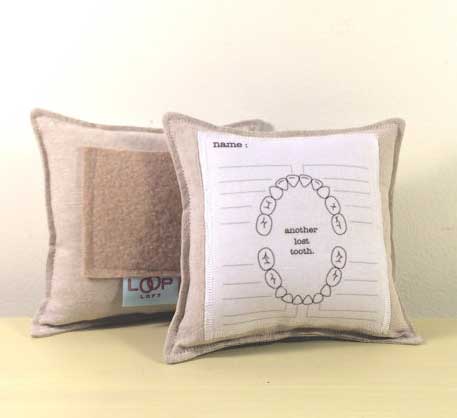 What’s your favorite tooth fairy memory from your childhood or with your children?