Create a wine cork holder shadow box to display all of your wine corks and remind you of your favorite wine drinking memories. Makes a great gift for a wine lover! 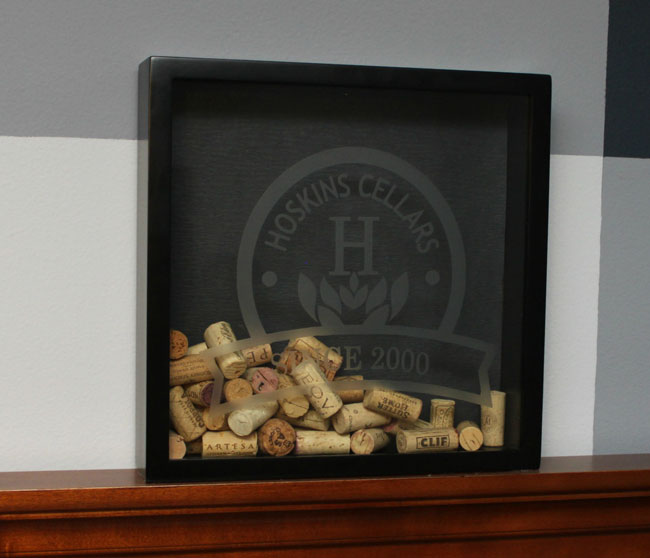 I’ve recently begun to keep the corks from the wine we drink. I wish I had been doing this for a while. My husband and I went to Napa Valley for our 5 year anniversary and that’s when we really upped our wine drinking game. Eight years later and I had never saved any of our corks. My head was swimming with a lot of wine cork craft ideas (like this wine cork monogram since we all know, I heart monograms), but I knew it would take a while to save the required number of corks. I had seen a wine cork shadow box on Etsy a while back. I liked the concept but the saying was a little too trendy for me, so I set out on trying to figure out what I wanted to use for my personalized wine cork holder shadow box. I settled on creating my own version of a vineyard logo for our family.

*Some supplies links may be linking to affiliate links on amazon.com or other retailers. 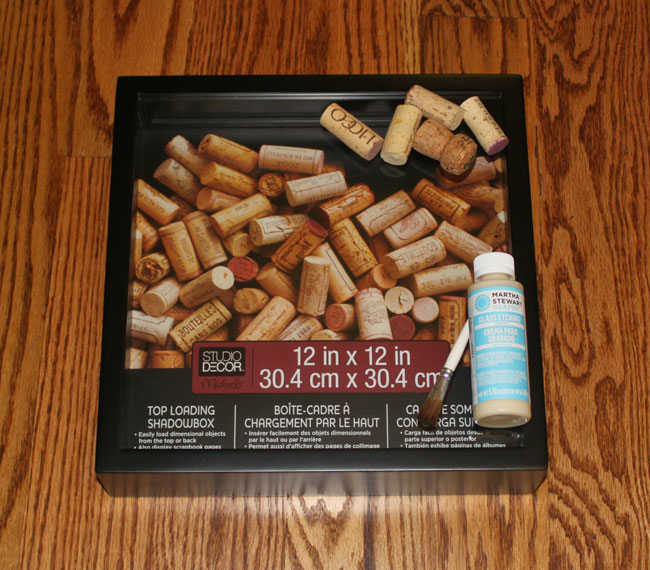 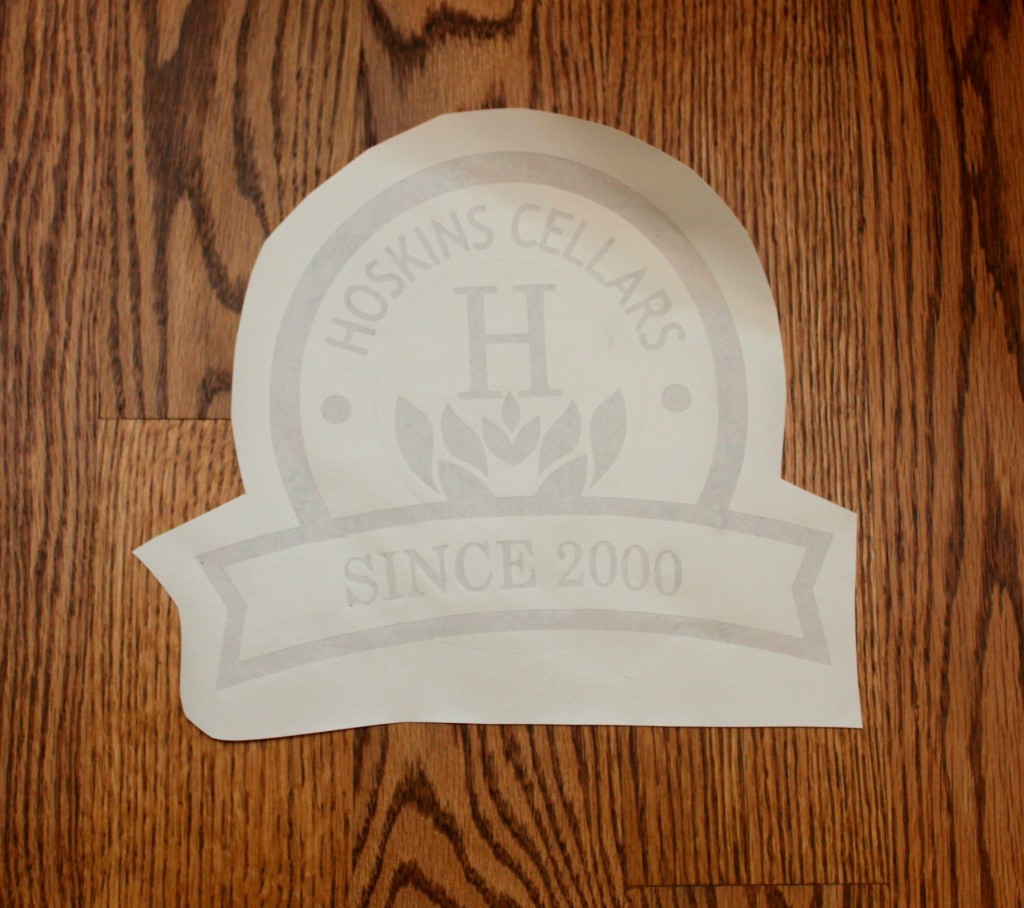 I’m no graphic artist, so I created my stencil using a free label design and edited it in Adobe Illustrator. Then I imported it into my Silhouette Studio software. I’m not going to lie, it took me a while to get the stencil design right. I’m still fairly new to the Silhouette, but I’m learning with every project. I used contact paper to make my stencil.

This is the first time I had done anything with etching cream. It won’t be my last!  When I was at the store buying etching cream, I decided on the Martha Stewart brand on a whim, mostly because I liked the size of the bottle and that it had a brush included. I had zero problems with using it and my project turned out well, so I’d recommend it.

First I cleaned my glass with rubbing alcohol and let it dry. Then I adhered my stencil to the front of the glass on the shadow box. Then I applied a thick even layer of etching cream on the exposed parts of the stencil. I worked in small sections and went over each section twice to get the desired thickness. I learned later that I still didn’t apply it thick enough. I’ll tell you how I fixed that later, but a word to the wise – lay it on thick! Be careful not to touch any parts of the glass with etching cream that you do not want etched.

The directions say to let dry for at least 15 minutes. I was working on some other things at the time, so mine was probably on 20-25. After that, I rinsed it off underneath running water. At first I thought it didn’t work because it looked like the etching cream was just washing away and with the glass wet, it didn’t appear that there was a design left behind on the glass. It was visible once the glass dried a little bit. 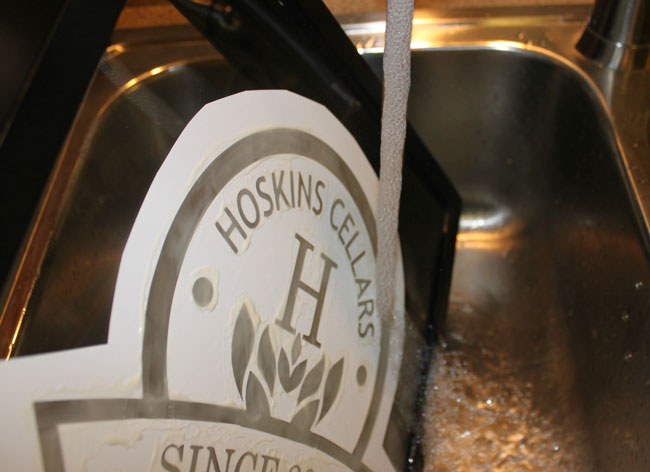 At this point, I took a good look at my design and noticed a few slightly uneven spots where I hadn’t gotten the cream thick enough. I decided to apply the cream again to make sure I had an even design. I did the whole design again and not just the uneven spots. It probably wasn’t necessary, but since it only took about 10 minutes to apply to my whole design, it seemed worthwhile. I let sit for 15 minutes and then rinsed again.

At this point it’s hard in pictures to see that it’s etched, but it is. Then I started to remove the stencil and was SO happy with the result. 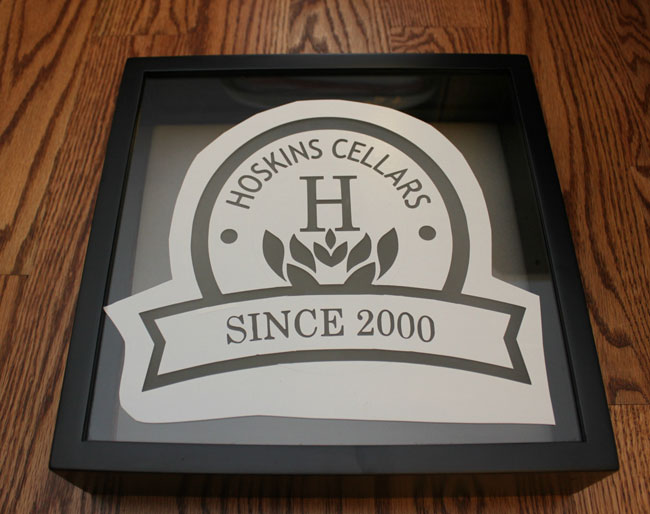 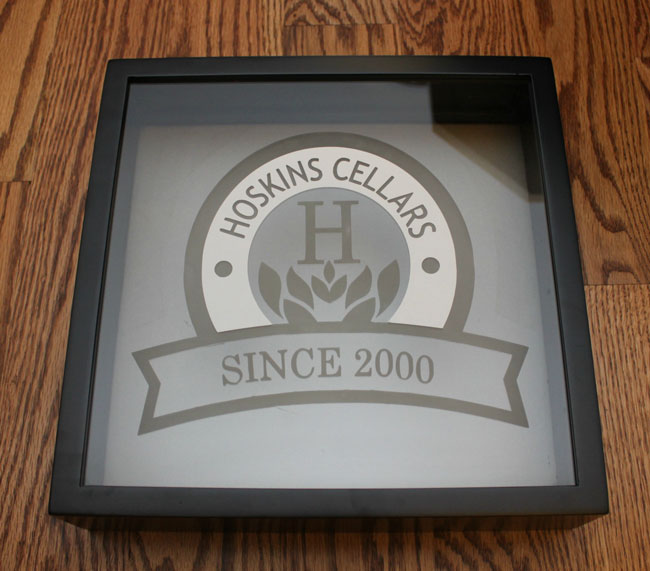 After the stencil was completely removed, I cleaned the front with glass cleaner to get rid of any stencil residue and fingerprints. It’s really hard to tell from the pictures, but the original backing for the shadow box was just cardboard. I got a 12×12 piece of black paper and glued it to the inside. 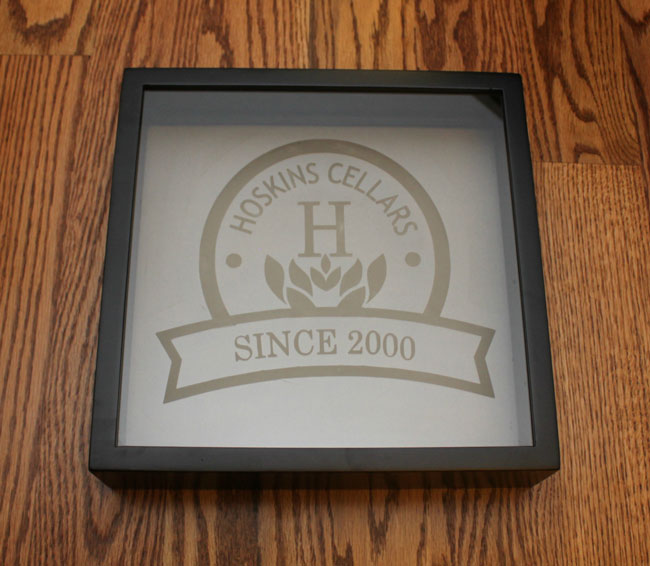 I have two possible places I’m thinking of hanging it in our kitchen, so I’ll share some more pictures once we have it hung up.

There’s quite a bit of etching cream left, so I will be thinking about what to etch next. I think I may make some of these shadow box wine cork holders as Christmas gifts this year and maybe some monogram wine glasses to go with them. Maybe some ornaments. You haven’t seen the last etching project from me!