Each year I take off the week between Christmas and New Year’s from work, and each year I generally try to tackle a home project. One year I organized my basement (wish it would have stayed that way!), and last year I repainted my bathroom cabinets from honey oak to a dark espresso color and then repainted the walls. This year I’m trying to organize all my digital pictures (a few years worth) so I can transfer everything to a new computer. More on that some other time.

When I originally started out, I was just going to paint the bathroom walls. In looking for inspiration for colors on various websites (and on Pinterest, of course), I ran across a blog post on painting honey oak cabinets and decided to triple the scope of my project. This seems to happen to me a lot, as my husband will attest to. At the time, I wasn’t thinking about blogging, so I didn’t take step by step photos, but I did get an “almost” before as well as some afters. 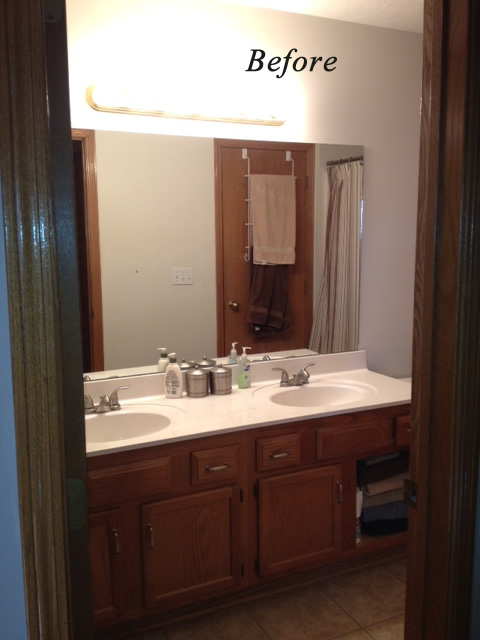 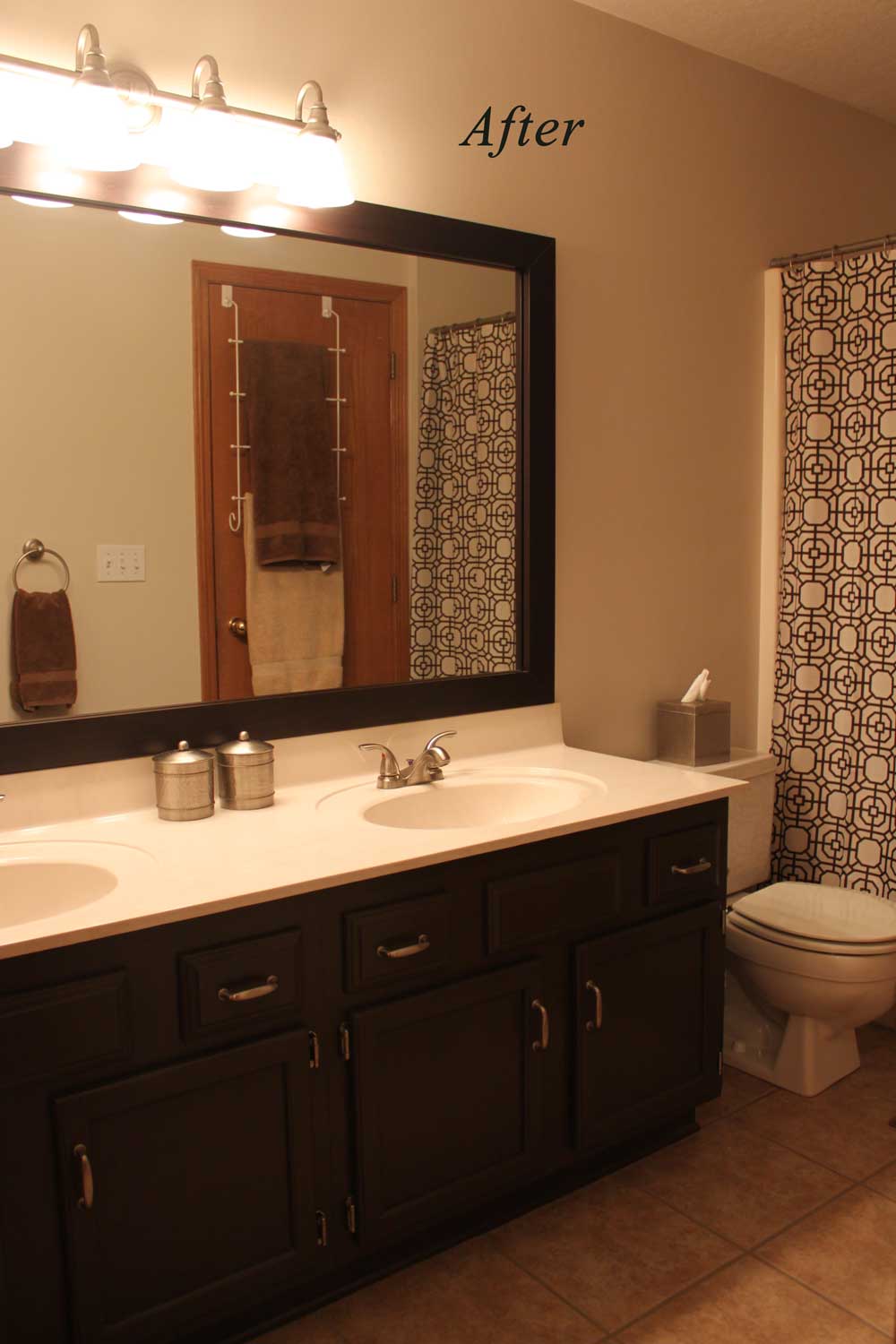 The instructions I followed were from CentsationalGirl.com’s Budget Bathroom Makeover post. I followed her directions pretty much exactly for painting the vanity and I even used the same color she mentioned in her follow-up post which was Valspar’s Betsy Ross House Brown in the soft gloss Kitchen & Bath formula. For the primer I used Valspar’s multi-purpose latex primer in tintable white and had them do a dark brown tint at Lowe’s. On the top-coat I used Rust-oleum’s Ultimate Polyurathane Semi-Gloss Interior. One change in the process – I used an electric sander to lightly sand off the top finish rather than doing it by hand. I removed all the doors since we were planning to replace all the hinges anyway.

I applied it all using 1.5″ and 2″ brushes. One coat of primer, two coats of color (except the backs of the doors, I only did one coat on those) and then two coats of poly top-coat. The vanity took me about 2.5 full days to do, extended a bit for drying time, lunch with some friends, and family time.

I ended up painting the walls a light cream color (Valspar’s Woodrow Wilson Putty). We already have quite a bit of color in several other rooms in the house and with the dark cabinets, so I wanted to keep it light. We’re also starting to think about resale in a year or two.

We had already replaced the door/drawer pulls and the faucets, so we didn’t have to buy new ones. We did get new hinges finally in brushed nickel to match the pulls rather than the old worn gold nastiness. We replaced the light fixture, and then most of the towel holders and other accessories. We also framed out the mirror using a frame from Mirrormate.com, the Cherokee style. This was featured in the blog post I mentioned. I can’t say enough good things about the product. It was really easy to install and looks fantastic. This is one of those things that I felt was worth the little extra money rather than doing it ourselves. They often run discounts, so if you’re interested sign up for their emails or Like them on Facebook to get updates on specials.

It’s been right at a year since I painted the cabinets and they are wearing very well. I’d say there are only a few very small nicks in the paint and that happened the day or two after I painted it. It takes about a week to “cure” fully. It’s on the side next to the toilet and is so small only I probably notice it, so I haven’t bothered to touch it up.  I’m very happy with the result and how it has lasted so far.

When I was about half done with this project, I had the itch to paint my kitchen cabinets as well. I knew it would take significantly (understatement!) longer, so I waited several months. I ended up using a different technique on the kitchen, which I tried first on our upstairs bathroom – this required NO SANDING! I was skeptical since I was so happy with how the first bathroom project turned out. We’re almost done having the floors redone in our kitchen, so I’ll write about painting the kitchen cabinets in an upcoming post.

I still haven’t decided what to do with the honey oak trim in my house. You can see the trim and the doors are still that color. I don’t think I want to paint it white, but I’m not opposed to anything at this point. Any suggestions or previous experiences?